Since the All-Star Break, Fausto Carmona has been only occasionally good. In the second half, he's gotten more strikeouts, but his ERA is 5.59 compared to a 3.64 first half ERA. Today he looked better; his changeup was sitting in the mid-80s, where it's effective, and at times his two-seamer was dropping off the table. His problem was staying in the strike zone. He walked four Royals, and although he lasted into the seventh, he came to the mound already having thrown over 105 pitches.

The Indians faced the well-traveled Bruce Chen, and couldn't solve the soft-tossing left-hander until the bottom of the sixth, when Jason Donald hit a drive to center field that somehow cleared the wall, tying the game at two. Donald started the game on the bench, but was put in when Matt LaPorta left after tweaking his left hip. The Royals responded the next inning, as Kila Ka'ahiue drove home a run with a double. The next inning, Tony Sipp gave up a no-doubt homer to the left-handed Mitch Maier. With Joakim Soria looming in just an inning, the Indians were going to have to get to Blake Wood if they had any shot of coming back, but Wood struck out the side. Manny Acta, perhaps knowing the chances of the Indians getting back in the game, send Hector Ambriz into the game to pitch the top of the ninth. Ambriz gave up three hits and two runs in what's likely his last non-garbage time appearance of the season. 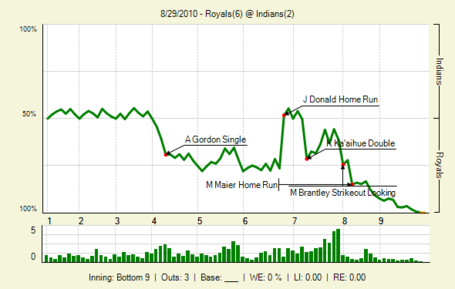