As this season is winding down, I've been watching these games with an eye towards 2011, and how certain players are going to fit into next year's team. I've been more generous than the usual "would he play on a championship team" because next year's club won't be built as such. Most of the position players are easy to peg because the development of the lineup seems relatively easy to see, but the starting staff has been a lot tougher to decipher.

I'm confident that only two of the five current starters will actually be in next year's rotation (Carmona and Talbot), and I've soured a bit on Talbot's future in the second half. The Indians have said that Justin Masterson is best suited as a reliever, though that presupposes the Indians have five starters better than Masterson in the rotation. The other two guys, Josh Tomlin and Jeanmar Gomez, jumped quite a few of their competitors to make it to this point, and they'll have to do so next spring. So their remaining starts are even more critical than, say, Carlos Carrasco's, for Carlos is going to have to do a lot to lose his spot in next year's rotation thanks to stuff and minor-league performance.

Tonight's pitcher, Jeanmar Gomez, still has a nice ERA, but he's working very hard to maintain it. After his first two starts (New York and Toronto), he's faced a string of poor to middling offensive teams (Minnesota, Baltimore, Kansas City, Detroit) with another shot at KC tonight (without Billy Butler), and he hasn't gotten beyond six innings in any start. To his credit, in most of those games he's left having only giving up a run or two, but again, I'm looking at how this pitching package will stack up for years to come. He's only 22, a year younger than Carrasco, but with more marginal stuff (~90 mph fastball, decent slider, ok change). He does have durability, something that's easy to overlook; he's thrown at least 135 innings since making his full-season debut. I'd like to see how he does against some more more potent lineups, but the way his starts stack up, the best he'll face between now and the end of the year will be two consecutive starts against the Angels in September, and possibly, if the Indians don't shut him down, the White Sox at the end of the season. His other three starts will come against the Royals (twice) and Mariners.

Anyway, about this particular game. Gomez fought his way out of some tough jams and was helped greatly by a line-drive double play to end the fifth. He gave up his first runs of the game on a two-run homer by Wilson Betemit in the sixth and couldn't finish the inning, leaving the game after walking (!) Willie Bloomquist with two outs in the sixth. Tony Sipp picked off Bloomquist to end the inning, then pitched the seventh.

The Royals may not be a good team right now, but every fifth day they're one of the best teams in the league with Zach Greinke setting up closer Joakim Soria.  Greinke, who looked as though he might not get out of the second, was still pitching long after his counterpart left the game, getting better and better as the game wore on. The Indians had a chance to break the game open in the second, when Travis Hafner stepped to the plate with the bases loaded and two out, but Greinke struck him out with ease to end the threat. He finished eight innings, and left the game with the score tied.

Wilson Betemit would knot the score in the eighth with an RBI off Rafael Perez. The reanimated Perez had given up runs in just two of his 12 August appearances, and has become on most nights the eighth inning setup to Chris Perez. Rafael got out of the inning with the score tied, and pitched a scoreless ninth. Chris Perez worked around a leadoff walk in the tenth, setting up Asdrubal Cabrera's walkoff homer in the bottom of the tenth. 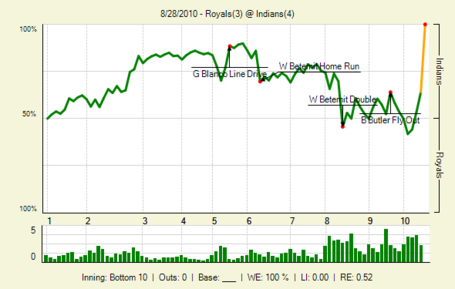