No, that score isn't another of my typos.

After scoring 14 runs in their last seven games, the Indians scored 15...in one game. It didn't hurt that Oakland wasn't in town, and that the Royals apparently thought the Indians were susceptible to hanging sliders.

The key hit in the game came in the second inning; after Travis Hafner singled to start the frame, and Jayson Nix doubled down the left field line. Trevor Crowe swung at the first pitch, though, and hit a lazy fly ball to medium-deep left field, not deep enough to risk sending Hafner with nobody out. Matt LaPorta then stepped to the plate and made amends, jumping on a hanger and hitting a majestic three-run homer. That seemed to prime the pump for the rest of the offense, for from then on it flowed constantly.The Indians batted around in the second, scoring three more runs, and didn't stop there.

Kansas City pitchers, starting with starter Bryan Bullington, threw the Indians a steady diet of breaking pitches. Which would have worked, had they not been spinning over the middle of the plate. After the Royals got back in the game by scoring three in the fourth, the Indians scored another run in the fourth and three more in the fourth from an unlikely source. Chris Gimenez, who hasn't hit at all in sporadic playing time, blasted a three-run homer to the deepest part of the park, normally the province of the big boppers. Jayson Nix joined the three-homer club in the eighth inning, making the score 13-3. Asdrubal Cabrera capped the scoring with a double later that inning; he had been the only Indian not to get a hit to that point.

Josh Tomlin was the fortunate recipient of this outburst; he barely made it through five innings, walking four batters and allowing eight hits; like his previous outing, he couldn't spot his cut fastball in the right places, so he, like Bullington and the rest of the KC staff, lived on the middle of the plate. The Royals, despite scoring only three runs, almost matched the Indians in hits (16 to Cleveland's 17), a testament to the bad pitching on both sides. 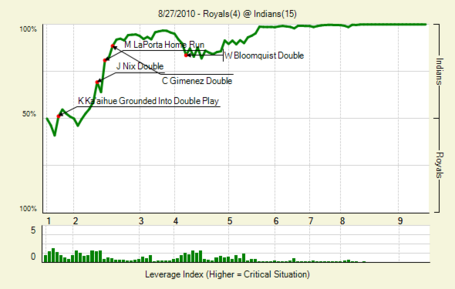