The Indians exploded for three runs, and got a rare good outing from Justin Masterson, giving the bullpen a late lead. Yes, this really happened.

Justin Masterson, who is apparently in his final stretch as a starter, made one of his better second-half starts, only allowing seven base runners in 6.1 innings of work. It didn't hurt, of course, that he was facing a lineup that swung at a lot of pitches that would have been balls, but at this point any good outing, regardless of who it comes against, is welcome.

The Indians scored their first earned run since Sunday in the fifth inning on a two-out single by Michael Brantley, knotting the game at 1. But in the next half-inning, LGFT Kevin Kouzmanoff broke the tie with a two-out double, plating Jack Cust. The Indians would respond to the response, though; Matt LaPorta hit his first home run since August 8th, a two-run shot. That home run marked the first time the Indians had scored multiple runs in an inning since August 19th, a week ago.

The bullpen, given a rare lead to work with, did not give it up. Joe Smith, brought on to get three consecutive Oakland right-handers in the eighth, only retired the first of them; he walked Rajai Davis and Mark Ellis. Manny Acta, even though he had Tony Sipp ready in the bullpen to face Jeff Larish, called upon closer Chris Perez to get five outs, figuring that there was little chance of actually overworking him the remainder of the season. Pure Rage cleaned up the eighth inning mess, and he retired the A's in the ninth. 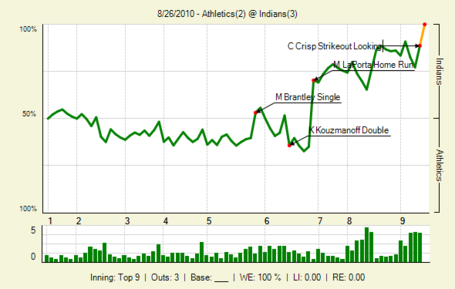