Mitch Talbot gave up five runs before the Indians even got to the plate, effectively clinching the game for Oakland. Two walks and a hit batter were the keys to the inning, setting things up for LGFT Kevin Kouzmanoff's capper, a bases-clearing double making the score 5-0.

To Talbot's credit, he would stay in the game, allowing one more run over five more innings, saving the bullpen for more competitive games. Sure, there were two nine-run deficits erased on the same day, but this lineup would never dream of scoring that many runs against even a bad pitcher, never mind five runs against Trevor Cahill.

The Indians got their first crack against Oakland's 22-year-old phenom, and like many other teams this season, were shut down by him. They did manage seven hits and two walks against Cahill, but four double plays killed as many potential rallies. They would score an unearned run when Kevin Kouzmanoff's error allowed Jason Donald to reach first to lead off the fifth, and Asdrubal Cabrera would drive him home with a two-out single.  That run would be just the fourth run in the last five games, just two of them earned runs. 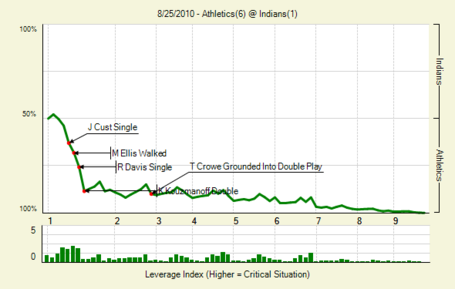