The Indians once again were stymied by Armando Galarraga, who retired the first fourteen Indians of the game and would only give up 3 hits in 7 innings. If you count the blown call at the end of June's almost-perfect game as an out, he retired 41 Indian batters in a row before Jayson Nix hit a double off the left field fence in the fifth inning. The rest of the American League has figured him out, but the Indians certainly haven't.

Justin Masterson gave up 11 hits and five runs in six innings, but he gave up four of those runs in the first couple innings putting the game out of reach. At this point he's only starting because the Indians don't have enough starting depth in order to move him to the bullpen. Too many pitches were up in the strike zone, many on a horizontal instead of a vertical plane, and all batters, both right and left-handed, were hitting him hard. He didn't walk a batter, which I suppose was a small victory, allowing him to stay in the game through the sixth. 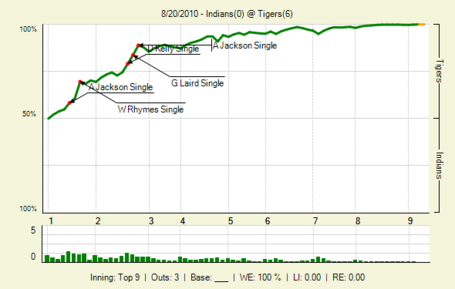