The Indians won in spite of themselves. They committed five errors, Mitch Talbot couldn't finish the fifth inning, and the offense didn't score a run until the eighth inning, but pulled away with seven runs in the last two innings to win. It was the first time the Indians won a game despite committing five errors since the 1996 team did it.

Mitch Talbot, though he certainly wasn't helped by the bad defense behind him, nibbled way too much for the lineup he was pitching to. While he did limit the damage to three runs when it could have been much more, it seemed to me he was giving the Royals hitters way too much credit. He has a lower-90s fastball and some nice off-speed pitches, yet he seemed to throwing like Paul Byrd. The difference being that (a) Byrd actually had a BP fastball and knew it, and (b) Byrd had exceptional command of his pitches. Since the All-Star Break (not counting his injury-shortened start against New York), Mitch has not been able to last six innings in each of his six starts in marked contrast  to the first half of the season (6+ IP in 11 of 15 starts).

Tonight, though the bullpen picked up the slack, not allowing a run after Talbot left. Tony Sipp got out of the fifth inning, and Justin Germano, Rafael Perez, and Chris Perez each pitched a scoreless 1.1 innings each.

The comeback started with a fantastic at-bat from an unlikely source. Matt LaPorta, who has looked utterly lost at the plate for the past two weeks, hit the 13th pitch of his at-bat against Royals starter Kyle Davies into center field to plate the first run of the game with one out in the eighth. Kansas City was two outs away from getting the game to Joakim Soria, and before LaPorta stepped to the plate, Davies was in good shape with his pitch count. After the LaPorta hit, Davies was near the end of his rope, and the Indians were now bringing the tying run to the plate. After Jason Donald followed with a single, Blake Wood was brought in, and the Indians offense exploded, scoring four more times in the inning.

Cleveland added two more runs in the ninth, but lost Michael Brantley to an ankle injury. Brantley grounded what would have been a base hit up the middle, but as he pivoted to run to first base, he severely twisted his ankle and collapsed in the batter's box. If the injury is serious, it would be terrible timing, as Brantley has been fantastic since returning from Columbus; in the month of August, he's hitting .333/.400/.511 (51 PA).

UPDATE: Castrovince is saying that X-Rays on Brantley's ankle were negative, and that he's day-to-day (H/T to bentausig).

UPDATE, PART II: Can't believe I forgot this. Last night's electronic pep talk didn't work, as Andy Marte made an error after being inserted for defensive purposes. The saga continues. 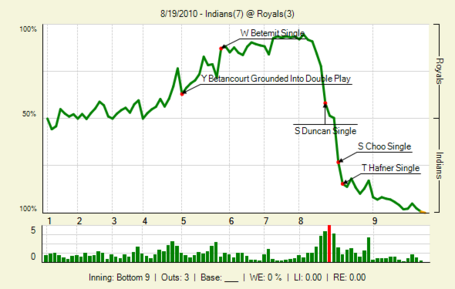