Why do you make things so hard? Wait, before you crumple up this letter and get back to the dominoes, just hear me out.

You've made it this far, outlasting Casey Blake, Eric Wedge, and the waiver wire to get to this point.  The two guys  that you're competing with for playing time aren't third baseman, and Manny is looking for an upgrade on defense after watching Jhonny all season. So as long as you made the easy plays and mixed in an occasional  gem, you could hit .250/.310/.450 and you'd be the guy going into next season. Is the pressure getting to you? I know midweek games in Kansas City are tough ones, what with that annoying organ and all, but just think of the future if you put together a couple of weeks of good baseball: you won't have your Christmas party spoiled with a non-tender, you won't have to worry about latching on as an NRI in January, and if you play your cards right, you mind actually be the starter next season.

Now, about last night. Not good. Allowing a runner to get to third on a grounder to you? Not grabbing a grounder that even Jhonny would get to? Plus, you ticked off Fausto, and if he didn't melt down, you guys would have won. At this rate, you'll be watching Luis Valbuena play third base the rest of the season; that's gotta be a new low even for you. Yeah, you had 2 hits, but think about the ninth: Manny let Matt hit, and then pinch-hit for you.  It wasn't because of positional problems, since you play a good first base. No, all he was thinking about were those botched plays, that pick-off last week, and all those dives coming up empty. So instead of you up there tying the game, it was LaPorta and Pronk and Trevor hitting against Soria. Are you going to accept that Trevor Crowe is hitting in the clutch instead of you? I wouldn't.

I bring these things up not to discourage you, but to spur you onto future greatness. It might be the dog days of August, the Indians might suck, but this is your time. ANDY MANUEL MARTE PARTAY TIME. Now get out there and prove me right. If Manny feels like playing you.

P.S. If you have some spare time, you might want to give Hector some pointers. 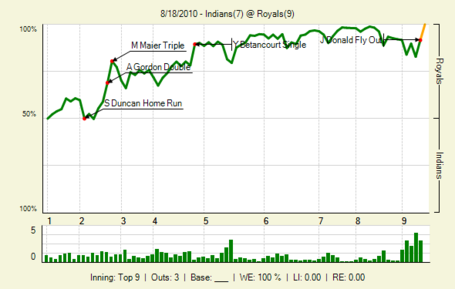