When two bad lineups meet, this is the type of result you expect.

Despite the score, it was not a pitcher's duel. Zach Greinke wasn't pitching up his ability, and tonight the Indians could have scored 2 or 3 more runs off him had they had a more potent lineup. Greinke gave up 8 base runners in his six innings, only striking out four, a good outing for most major-league pitchers against most offenses, but considering this pitcher against this lineup, it was a bad start.

Still, thanks to an equally weak Royals lineup and Jeanmar Gomez muddling through a couple jams, the Indians could have won the game. The lone run of the game came, appropriately enough, on a groundout in the second inning. Travis Hafner, who had an excellent game, lined a double into Kauffman's spacious right field gap, and went to third on Jayson Nix's single to left. Matt LaPorta, the sixth-place hitter who hasn't had a hit in over a week, did manage to drive Hafner home with a grounder off the plate. That was it for the offense. In the seventh, Jesse Chavez faced seven Indians hitters, but nothing came of it, for Jayson Nix struck out looking with the bases loaded. Jayson Nix, the fifth-place hitter.

The Royals scored their runs the easy way, with two home runs in consecutive innings. After the second one, Greinke would only go one more inning, leaving two innings until closer Joakim Soria, but nothing was doing. 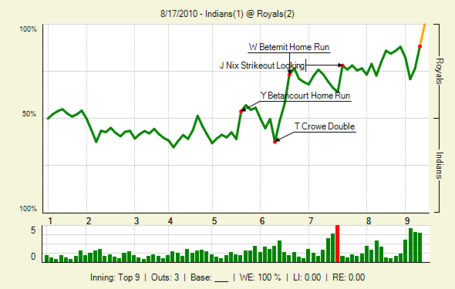