Through six innings, both Justin Masterson and Felix Hernandez threw six shutout innings, though each got there in wildly different ways. Masterson finished the sixth having thrown 100 pitches (51 Balls, 49 Strikes), and allowing seven base runners, six of them via walks. Hernandez, on the other hand, had thrown a lot less pitches and allowed just four base runners.

If not for two outstanding plays by Matt LaPorta in the sixth, the Mariners would have been the team to break the game open. With the bases loaded and one out, Ichiro hit a line drive over first base, and LaPorta dove, catching the ball in foul territory. Chone Figgins then tried a surprise two-out bunt, but LaPorta fielded the ball and nicked Figgins' jersey with his glove to end the inning. LaPorta hasn't played much at first in his professional career, but his hands and instincts around the base have been impressive for someone learning the position. Now if he only he could start hitting.

Just as errors by Andy Marte led to a grand slam in yesterday's game, a Mariners error led to an Indians grand slam. With two outs and nobody on, Luis Valbuena hit a routine grounder to Chone Figgins, but the Seattle second baseman bobbled the ball, and his throw pulled the first baseman off the bag, according to the first base umpire. I think the Indians got a break, as Kotchman kept his foot barely on the bag, but even so, the Indians only had a runner on first with two outs and weak-hitting Lou Marson at the plate. But Marson snuck the ball through the hole on the right side of the infield, and Michael Brantley (who's looking more and more comfortable at the plate) broke the scoreless tie with a single to center. Asdrubal Cabrera then made it 2-0 with a double to right center. Shin-Soo Choo was given an intentional walk to load the bases, bringing Travis Hafner to the dish. Hafner, who was playing in his first game since July 28th, had gone 0-for-3 against King Felix, striking out twice, but when Hernandez threw a fastball waist-high and over the middle of the play, Pronk got on top of it and hit his eleventh career grand slam to put the game away. It was an incredible reversal of fortune considering how good Hernandez had been to that point.

The Indians, who had scored only 5 runs through the first 24 innings of the series, broke out for 9 runs in the last three innings, capping off the explosion with home runs by Jayson Nix and Michael Brantley in garbage time. Nix, with his seventh inning solo shot, tied Travis Hafner for second on the team with ten home runs. Brantley's home run was a two-run line drive just over the right field fence. It's been nice to see more line drives off the bat of Brantley in recent games. 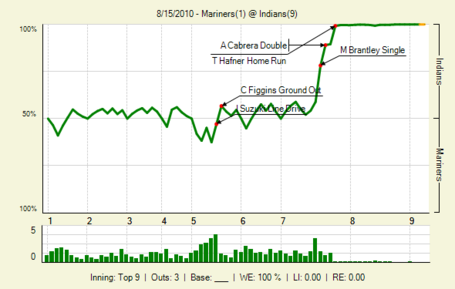