After the Indians held their in a long stretch of games against good teams, six games against the two with worse records than them seemed like an opportunity to have a great week. But with one left to go in that stretch, the Indians have guaranteed themselves series losses against both the Baltimore Orioles and Seattle Mariners. You could chalk it up to not having that extra bit of excitement that comes with playing a good team, or, more likely, the full effect of losing five of their better players due to trade and two (Hafner and Santana) due to injury is starting to show itself.

In this weekend series, the Indians faced a team also in disarray. The Mariners have an entirely new coaching staff, but that hasn't changed the fact that their offense is only scoring three runs a game. Still, bad pitching and bad defense can turn an inept offense into a powerhouse in the span of an inning, and that's what happened in the fifth inning.

Mitch Talbot was the starting pitcher, making his first appearance since leaving the July 29th game with a back injury. Talbot, who threw only 68.1 minor league innings last season, was going to be watched closely the second half of the season, so while you hate to lose a starting pitcher to injury, Mitch's minor injury perhaps was a blessing in disguise. Mitch's style of pitching is conducive to high pitch-count innings, so even though he's only thrown 121.0 innings in 20 starts, he's thrown a lot of pitches, and it would make sense to limit his workload the remainder of the season, even with his recent break.

Talbot allowed a first inning run to the Mariners, looking rusty. His command got a bit better in the next few innings, but still pitched almost constantly with runners on base. The fourth, though it didn't look that way in the box score, was what knocked Talbot out of the game. After he retired the first two batters of the inning, LGFT Josh Bard doubled to left, and the next two reached base to load the bases. Then, after a lengthy at-bat, Ichiro walked to force home Seattle's second run. Mitch got Chone Figgins to ground out to end the inning, but he wasn't the same after that; he had thrown around 80 pitches to get through four innings, and after the Indians tied the score with two in the bottom of the inning, he threw a ball in Russell Branyan's happy zone to start the fifth, and the LGFT hammered the ball over the left field fence to give Seattle the lead back. Then, with Andy Marte's help, the inning went from bad to disastrous. Marte was picked off of first to end the bottom of the fourth, but his top of the fifth was even worse. After Jose Lopez singled, Marte committed two errors, the first one a tough play, the second one a definite misplay, to load the bases. That was it for Talbot, and with the game only in the fifth, Hector Ambriz was brought into a tough situation.

The Indians only have a couple of weeks until the difficult part of the Ambriz Rule 5 selection will have been satisfied; keeping him on a major-league 25-man roster. Come September 1, the roster expands to the 40-man roster, and they don't have to use him the rest of the year if they don't want to. But for the rest of the August, they're going to have to continue to use him when the game is a laugher. Hector grooved a pitch high in the strike zone to Josh Bard, and the former Indian catcher hit his first career grand slam. Bard would finish the game with four hits, including a double, in what was probably the game of his career. With the offense struggling to score 3 or 4 runs a game, that blast, which made the game 7-2 Seattle, put the contest out of reach.

One nice takeaway from this ugly contest was Frank Herrmann, who has struggled in recent outings, pitching three perfect innings to finish the game. 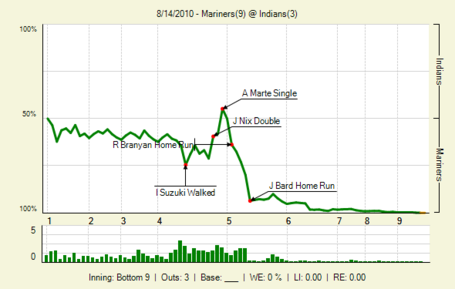