The Indians won their second straight game with a rookie starter pitching on three days rest, an accomplishment credited to both to the starters and the relievers who again logged extra duty while managing to maintaining narrow leads.

Jeanmar Gomez, like Josh Tomlin the day before, was understandably a less effective than in his debut, but limited the damage to two runs in five innings of work. He worked especially hard to get out of trouble in the first and second; those jams prevented him from going more than five innings, and the bullpen was again called upon to protect a narrow lead.

The bullpen would have a two-run lead thanks to two runs scored off of Jays starter Jess Litsch. The Indians loaded the bases with a double by Trevor Crowe, a bunt single by Asdrubal Cabrera, and a walk to Shin-Soo Choo. That walk ended Litsch's day, and LGFT Brian Tallet was called upon to quell the uprising. He walked Carlos Santana to force home the go-ahead run, but minimized the damage after that, allowing a run to score on a Matt LaPorta double play and striking out Jordan Brown to end the inning.

Manny Acta would use all five of his key relievers (both Perezes, Joe Smith, Tony Sipp, and Frank Herrmann), though only Sipp would be used to get more than three outs. After Sipp retired the first two batters of the seventh inning, Acta let him pitch to the right-handed Yunel Escobar, trying in effect to prevent either Herrmann or Rafael Perez from having to pitch. But he gave up a home run to Escobar, and with the scalding-hot Jose Batista up, Herrmann had to be used. Herrmann let loose a fastball tailing into the inner half of the plate; Batista roped the pitch down the line for another homer, and the Indians now led 5-4 with 7 more outs to go.

But the bullpen would hold the Jays at bay, though not without excitement. Joe Smith ended the eighth by striking out John Buck with a runner on second, and Chris Perez would strike out Bautista on a slider with the tying run on second in the ninth inning. 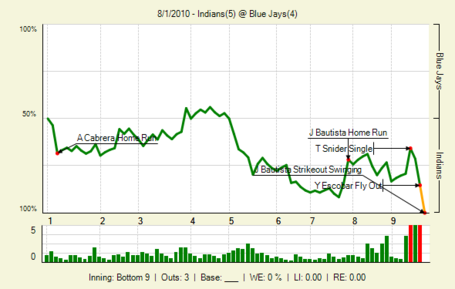