My earliest reference to Nick Weglarz on LGT is from July of 2007. This is expected but still somehow stunning: I have been following this hulking boy-man around the internet for an entire three years, breathlessly reading his box scores and willing him toward higher and higher levels of performance. I don't know why I became most interested in Weglarz instead of Wes Hodges or Max Ramirez or someone else but I did and it has proved a propitious choice. It's worth bearing in mind that this is no reflection of any particular insight on my part: I have seen Weglarz swing a bat less than a dozen times, all for Team Canada.

The man who I have referred to as (at various times) Big Daddy Wegz, Nick the Stick, Little Nicky Weglarz and a variety of monikers involving Canada is suddenly flaming hot for the Indiains' AAA team, the Columbus Clippers. It is becoming easier to believe that our little power-slugging prospect is nearly grown up, just a few months after he didn't appear in Goldstein's Top 11 for the Tribe. The details are as follows:

Since his promotion to AAA, Weglarz has thrown together a triple slash of .289/.388/.491 with fifteen 2Bs, one 3B, and five HRs. Those are very good numbers for a young man of 22 (he'll be 23 on December 16) just a heartbeat away from the major leagues (yes I'm implying he would be promoted in the event of an assassination). However, as is always the case, the numbers are even more intriguing when we start to manipulate them.

Let me see if I can snow you as badly as I've snowed myself: first, it seems obvious that any young player deserves some kind of acclimation period upon a level promotion and, indeed, Weglarz took one in May and June. In the first two months he spent in Columbus, Nick struggled to post even a .700 OPS and, after all, wouldn't we all struggle like this in a new locale? I'm sure he was trying to find out where the best places to eat were, where to get his haircut-all the normal stuff.

Now, his feet soaked through, Weglarz has claimed July as his own: .386/.462/.702, eight walks and ten strikeouts. He has, indeed, become the new captain of the Clippers. For further self-delusion purposes, consider that if he qualified, Weglarz would trail only five men in the IL OPS standings. This is a flawed methodology of course-there are certainly other non-qualifiers performing as well or better than Weglarz (Jared Goedert coughs loudly from the corner). 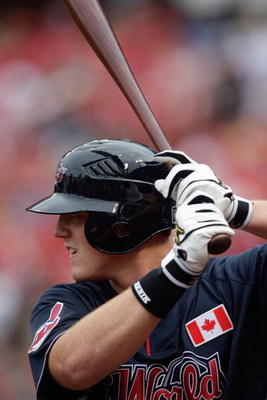 Finally, quickly comparing Nick's XBH% to those of some other top prospects:

This is all existing without a clear context but for some points of reference consider guys who have put up decent AAA numbers but with less power like Cord Phelps (29%), Josh Rodriguez (34%), and Michael Brantley (18%). Also, might as well say that Jared Goedert's hits have gone for extra bases 49% of the time this year.

So, that's a brief update on Cleveland's long time coming power prospect. Perhaps he's just in a hot streak or perhaps he's about to ascend to the very top of prospect ranking boards. Still, pretty cool, right? That Candian kid, Nick Weglarz, he's all the way to AAA! And he's raking!