I found myself thinking back today to Ozzie Guillen's infamous "choke" sign during the final series of the 2005 season.  Specifically, I was thinking, It's a damned shame that there is no universal gesture for, "You guys are our bitches."  At least, as far as I know there isn't.  Because if there were, it certainly would have been appropriate for Manny to flash that gesture over to the other dugout today, right around the middle of the third inning.

Think about that.  Against all other clubs, the White Sox are on the edge of mediocrity at 20–24, while the Indians are right in the thick of dismalia at 13–30.  Yet the head-to-head has favored the Indians strongly.  It is exactly this kind of head-to-head oddity that often skews or even decides a division race, as we saw back in that same old dumb 2005 season.  This year, of course, the most it might skew is the race for 3rd place in the AL Central, which may well be on the line when the Indians next visit Chicago, for the final series of the 2010 season.

Lou Marson homered today, though he only went 1-for-4.  His OPS is 637 over his last 30 games.  That is a perfectly good OPS for a young, rookie catcher, especially one who is emerging as a fine defender.  The eventual arrival of Santana is a situation that can be looked at in isolation.  Both the short-term and long-term track records now suggest that Marson in his own right is not a problem that needs solving.

But then there's Tony Sipp, who had a 0.50 ERA over six solid weeks, ending about a week ago.  For the past week, however, he's got an ERA of 81.00 over four appearances.  Granted, ERA is not a good way to measure reliever performances, not in the least.  An ERA of 81.00, however, does at least give rise to reasonable supposition that Sipp has not been good.

Having said that, Sipp did not do much of the damage today (though perhaps that's just because he wasn't given enough of an opportunity).  He opened the inning by allowing a rare outfield hit to Juan Pierre, then a sacrifice by Omar Vizquel (the 7,951st out of Omar's career, for those keeping track).  Sipp was then lifted for Jensen Lewis, or as I like to call him, Guy Who Used To Not Suck #9.  Peering into Jensen's mind at that moment, I believe what he was thinking must have been something like, Better to walk the bases loaded than to let Rios and Konerko beat me.  So much for those smart Vanderbilt kids.

Now out comes Zombie, who, it should be noted, pitched very well in the following inning, the 8th, allowing no walks and no balls out of the infield — infield popup, groundout, infield single, groundout.  Very nice.  Back in the 7th inning, however, with the bases loaded, there was no such keeping it in the infield.  There was outfield flyout, two-run double, outfield flyout.  And this is the key with this club, of course.  It's not just about sucking all the time.  It's about sucking a lot of the time, and especially when it will do the most damage.

Funny thing is, though, despite all that, the White Sox are still their bitches. 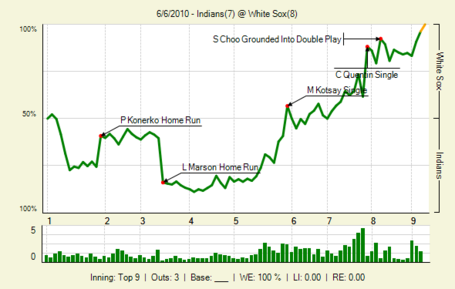