For the first time in quite a while, the bullpen and the offense both had good outings. White Sox starter John Danks was losing it in the sixth, but Ozzie Guillen left him in long enough for the Indians to break the game open. Jhonny Peralta doubled off the wall to drive in the go-ahead run, and after that, it seemed the offensive pipe that been stopped up for so long was unclogged. Peralta had his best offensive game of the year, going 4-for-5 with two doubles. Luis Valbuena had three hits, which equaled his hit total for the entire month of May. Austin Kearns, who had been in a slump, collected three hits of his own. Travis Hafner and Jason Donald were the only batters not to collect a hit; Hafner especially looked lost, jamming himself several times.

Frank Herrmann made his major-league debut tonight, and in a tough spot. In the sixth inning, Justin Masterson walked Alex Rios to put runners on the corners with two outs, and Manny Acta decided that was enough. In came Herrmann to pitch to Gordon Beckham. Beckham hit his first major-league offering to center field for the final out of the inning. The undrafted free agent pitched the seventh as well, retiring the White Sox in order. By that time, the Indians had pushed the lead to 8-1, and the game was out of reach. 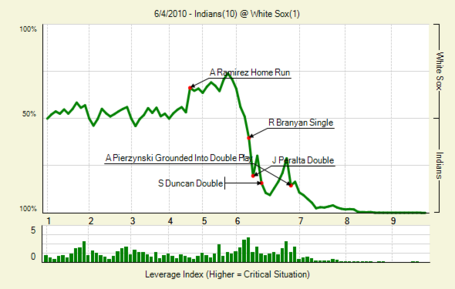