When the Indians brought Carlos Santana to the majors, Manny Acta immediately placed him third in the order, a spot normally reserved for a team's best hitter. He's lived up to that placement, hitting .333/.453/.725, walking twice as much as he's struck out in 64 plate appearances. Although there are many similarities between he and LGFT Victor Martinez (both switch-hitting catchers, both with prodigious minor-league numbers, both former infielders), those similarities end with their swings. Victor has a quiet, smooth swing, while Carlos' swing is more quick and violent. Yet despite the aggressive stroke, Carlos hasn't missed many pitches, whether they be fastballs or breaking pitches.  In the first inning, Carlos hit another rope, singling to right. Travis Hafner then hit his first of two doubles of the game. Both would then score when John McDonald made a rare bad throw to first on a grounder. Another difference between Santana and Martinez is speed. Santana scored from first on a Travis Hafner double off the center field wall in the fifth, showcasing good speed for a catcher.

Matt LaPorta blasted a home run to the left of the deepest part of center field in the bottom of the sixth, showcasing power that had been largely absent during his first stint of the season. The home run pushed the lead to 5-2, and would end up being the difference in the game.

Two starts ago, in Pittsburgh, Fausto Carmona was dominant for six innings, then completely fell apart, giving up his first three runs of the game in four hitters. Tonight, his start flowed along a similar  arc; through five innings, Carmona had only given up two hits (both singles), and had erased both via double plays. But things started to fall apart in the sixth; he loaded the bases with one out, giving up two singles and hitting a batter. He did get Vernon Wells to pop up on the very next pitch, but then Adam Lind laced a single to right, cutting the Indians' 4-0 lead in half. He got out of the inning without allowing any more damage, but allowed the first two batters of the seventh to reach, ending his night. The Indians bullpen and defense couldn't keep those two two runners on base, though neither scored on a hit. Tony Sipp threw a wild pitch, allowing the first to score, and then Shin-Soo Choo dropped a fly ball in shallow right to allow the second home.

Kerry Wood got his third straight save, striking out one and getting the other two outs via a double play. One can only hope that he gets on a roll so that the Indians can move him before the deadline, but also not scare off teams by finishing too many games between now and then. It's still very unlikely that he'll get to 55 Games Finished in the remaining 91 games; counting tonight, he's finished 16 games, and would have to finish a game every 2.33 team games from here on out to reached that mark and in so doing trigger his 2011 option. 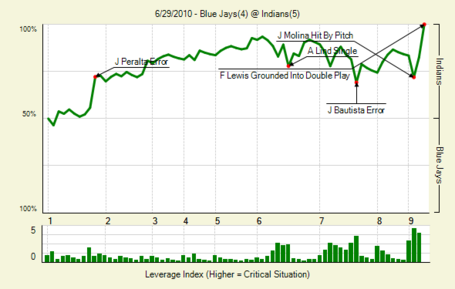