Jake Westbrook struggled to get through the first inning, but once he did, he cruised the rest of his outing. He gave up three of his six hits in the first inning, and only walked one batter. Westbrook made great use of his changeup, which is a much more effective pitch than before his surgery. His fastball is still sitting around 90 mph according to FanGraphs, but his changeup is about 1 mph "slower". I don't know if that slight mph improvement is what's causing it to miss more bats, or a better arm action on it, but it's a nice compliment to Westbrook's sinker, using it to get a strikeout if he needs it.

The Indians couldn't string many hits together against Ricky Romero, one of the best-kept secrets in baseball. Romero is striking out almost 9 per 9 innings, AND has a ground-ball ratio of over 57%, a rare combination. He only struck out two Indians in seven innings, but induced two double plays, short-circuiting Cleveland rallies. The Indians scored a run off Romero in the first inning, but couldn't tack on another run until the sixth, albeit in an unconventional fashion. Travis Hafner was hit by a Romero pitch to lead off the inning, then went to third on Jhonny Peralta's double. But Matt LaPorta couldn't drive Hafner home, grounding out to second base. Then Manny Acta took a chance, ordering a suicide squeeze, and Jayson Nix got the bunt down, executing the play very well.

That second run held up. Westbrook was pulled after allowing a leadoff single in the seventh, and Acta went with matchup guys to get through the seventh. Joe Smith, who was rocked in his last outing, retired both of the batters he faced, and Zombie Perez got Fred Lewis to ground out to second. Chris Perez faced the minimum in the eighth, allowing a single but also inducing a double play. And Kerry Wood struck out John Buck end the game with the tying run on second. 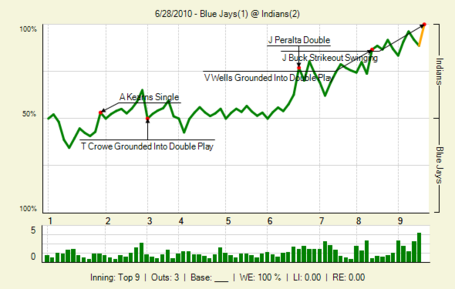