The five who started in the rotation out of Spring Training lasted until the end of June, quite a feat considering all the dire predictions heaped upon the starters in spring previews. Still, David Huff had been the weak link for quite a while, and if the Indians had been a better club he wouldn't have gotten as much slack. But eventually there were too many bad starts for even a rebuilding club to stomach, so Huff was sent off to Columbus, and Aaron Laffey was recalled in his place. Laffey had been starting for the Clippers after serving as a reliever in Cleveland, but he didn't really have success in either role. He had a 5.61 ERA in 25.2 innings (20 appearances) for the Indians, and in 4 starts for Columbus, averaged just about four innings a start, walking more than he struck out. I suppose the Indians felt they owed Laffey another crack as a starter, but I think Carlos Carrasco has been pitching better and deserved the callup more. Still, given how Laffey pitched tonight, it won't be long until Carrasco gets his shot.

Even though Laffey got some strikeouts, he was smacked all around the (small) yard. Some of that had to do with the tiny strike zone, but his general location was poor. Aaron allowed eight base runners and five runs in his four innings; he probably would have lasted another inning had this game been played under AL rules, but since his spot came up in the fifth, Manny Acta decided that a pinch-hitter would be more productive for the team than another Laffey inning. We won't ever know how Aaron would have fared in the fifth, but I'd hazard a guess it would have gone better than Joe Smith's outcome. Smith, also just back from Columbus after starting the season in the Indians' bullpen, face eight Reds and gave up four runs, turning a 5-2 game into a 9-2 blowout.

Carlos Santana hit his third major-league home run in the fifth, then was taken out for precautionary reasons with a thumb injury. Thankfully, the x-ray was negative, and Santana will be back in the lineup for Saturday night's game. 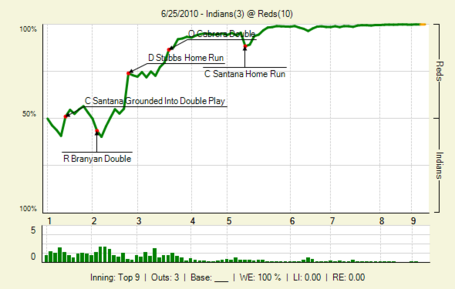