With this particular team, it's tough to try to pinpoint rock bottom from a talent standpoint, since it's easy to see how this roster could get worse. But the play in recent has just been awful, from the mental and physical mistakes on defense, to the everyday bullpen blowups, to the now disturbingly frequent bad starts from the rotation. The Indians lost in three different ways this series; they were shut down by Jamie Moyer on Tuesday, blew a late-inning lead yesterday, and today received a run-of-the-mill butt-kicking. This series sweep was a team effort, though with some notable oases of actual good baseball stuck in to provide contrast.

Carlos Santana's error turned a one or two-run inning into a five-run inning, though Carmona helped things along by hitting Joe Blanton. Carmona wouldn't strike out a batter, giving up nine hits in five innings. Five runs on most days is more than enough to beat the Indians, but Philadelphia made sure by tacking on two more against Carmona in the fifth, then made it a laugher by knocking Hector Ambriz around to the tune of five more runs in the sixth.

Jason Donald was the lone bright spot in the game, going 3-for-4 against the team that traded him, including a home run. The rest of the lineup had three hits between them. 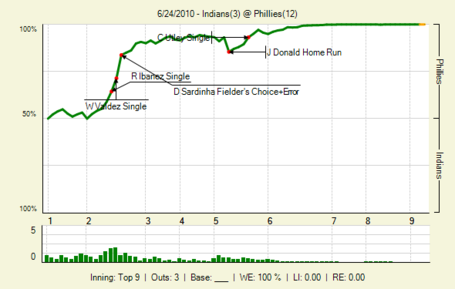