The good news: Justin Masterson had another good outing, keeping his pitches in the strike zone. When Justin keeps his walks down, he generally has success, for his stuff is good enough to miss bats no matter where in the strike zone he throws it. Also, Carlos Santana went 3-for-4 with two extra base hits. He drove in all three Cleveland runs, hitting a home run in the first and doubling in Shin-Soo Choo in the third.

The bad news: the bullpen. Zombie Perez essentially gave the Pirates a run on the strength of unforced errors in the seventh. After Jason Jaramilo singled to start the inning, Bobby Crosby laid down a sacrifice bunt, and Perez threw wildly to second; if he retired Crosby, then he wouldn't even have had to pitch to Neil Walker. During that extra at-bat, Perez threw wildly again, this time throwing past his catcher, allowing the tying run to score. In the eighth, Jensen Lewis allowed the first two batters to reach, and Tony Sipp couldn't keep them from scoring. 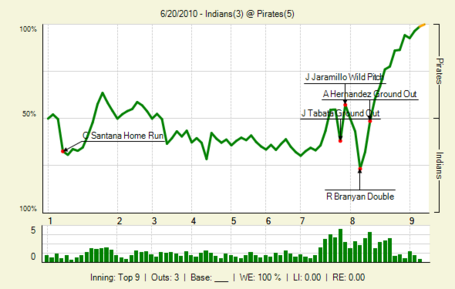