When you're a pitcher,the batters will always tell you how well you're doing. In David Huff's case, five earned runs on six hits and five walks in five innings against the worst lineup in the majors is a loud vote against he staying in the majors. Huff has a good enough fastball to have success in the majors, but the killer for him is the almost total lack of control. He's now given up 88 hits and 30 walks in 70 innings, way too many base runners to have success. He's only pitched past the sixth inning once in his 13 starts. Whatever statistic you look at, the results are negative.

The Indians still had a chance to win the game despite Huff digging the team a hole. Russell Branyan, after two horrible at-bats earlier in the game, pounced on a Jeff Karstens mistake, hitting a three-run homer off the right field foul pole in the sixth inning to bring the Indians to within a run. After the Indians later loaded the bases in the same inning, a golden opportunity presented itself; the pitcher's spot was up, and Travis Hafner was ready on the bench. But Pronk grounded out weakly to the pitcher to end the rally.They would get a couple more opportunities to tie the game, including in the ninth, when Shin-Soo Choo came up with the tying run on base. But he grounded out to second to end the game and Pittsburgh's twelve-game losing streak. 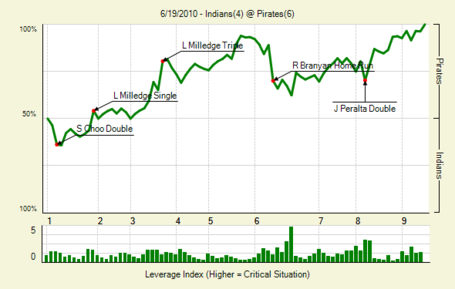