Armando Galarraga spent seven seasons in the minors before getting a shot with Texas, then made Detroit's rotation in 2008. Before tonight, he had never pitched a complete game, never mind a shutout. In his three appearances this season before tonight, he gave up 12 hits and 4 walks in 12 innings. In his two 2010 starts, he went 5.2 innings and 4.2 innings, respectively.

But tonight, he was, essentially, perfect. He finished tonight's game with only 88 pitches thrown, 67 of them for strikes. He did get lucky when Russell Branyan's sharply-hit grounder to the mound bounced off his foot and right to Brandon Inge, and was bailed out in the ninth when Austin Jackson made a great running catch on Mark Grudzielanek's line drive deep in the left field gap. It's as impressive a pitching performance as I've seen, and it should have ended with a celebration in the middle of the diamond.

With two outs in the ninth, Jason Donald hit a weak grounder to the right of first baseman Miguel Cabrera. Cabrera fielded the ball and tossed it to Galarraga, who was already at first base. Armando made the catch, then Jason Donald's foot hit the bag. Donald was called safe by first base umpire Jim Joyce. The call was not a bang-bang play; the throw beat Donald by a full step. When Joyce flung his arms outward, the emotions on the field shifted from the heights of exhilaration to the depths of shock in an instant. A couple seconds later, when everyone had been able to process what had happened, shock turned to anger. A clearly blown call had ruined what should have been baseball's twenty-first perfect game. It was the umpire equivalent of Bill Buckner letting the ball go through his legs in the 1986 World Series.

Even though the blown call saved the Indians from having a perfect game thrown against them, it still doesn't feel good. If Jason Donald's ball had hit a pebble and bounced over Cabrera's head, that would have been a lucky bounce. This doesn't feel lucky, it feels guilty. This game will go down in history, but unfortunately not in the type of history that shows baseball in a good light. This call will reawaken the cries for NFL-style instant replay, but, in my mind, if any good should come of this game, it will provide an impetus for a new evaluation process for umpires. Just like anyone else employed in the game of baseball, umpires need to held accountable for what happens on the field. There has to be consequences for continuing mistakes, for antagonism, and for general incompetence. That final blown call was not Joyce's first of the night; in fact, the inning before, he called Johnny Damon safe at first, and the Tigers would score two runs on the next play. Who knows how different the ninth inning would have played out had the Indians been down just a run? Based on manager Manny Acta's comments after the game, he would have pinch-hit Shelley Duncan in the ninth, and perhaps the Indians have a chance of actually winning the game. In a sane world, some deserving AAA umpire would be called up, and Joyce would be calling balls and strikes in Scranton tomorrow night.

Lost in the controversy was an excellent outing by Fausto Carmona. He finished the game having allowed two earned runs on nine hits and no walks. He fell behind 1-0 early when Miguel Cabrera hit a line-drive home run, and kept the Tigers off the board until the bottom of the eighth, and if not for the blown call in that inning, would have given up two fewer hits, and one less earned run. 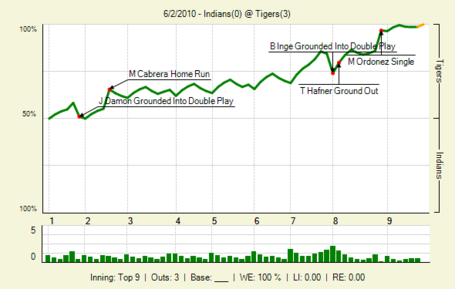