The Mets flat-out outplayed the Indians this series, and finished things off with a 6-4 victory. They smacked Jake Westbrook around early, though Jake stuck it out and ended up going seven. The Metropolitans scored three runs in the first, and would have scored at least one more had Shelley Duncan not nailed Chris Carter at the plate with a head-high throw from left field.

For the rest of the game, the Mets held a tantalizingly close lead. The Indians closed the gap to one in the third after Ruben Tejada booted a Travis Hafner grounder, allowing Choo to score from second. The next half-inning, New York pushed the lead back to three, taking advantage of walks and a bloop double. The Indians got to within a run in the seventh after Hafner drove in Carlos Santana on a groundout. Again, in the next half-inning the Mets would come right back and score. This time, after Tejada reached on a two-out bloop single, Jose Reyes smacked a ball past Choo, scoring Tejada from first base. Reyes was everywhere tonight, whether it be causing havoc on the base paths or making several tough plays in the field look easy. One of the few good things about Interleague Play is that you'll get to see close up great players you normally can only observe from afar. Reyes had never faced the Indians before this week, but made up for lost time, scoring five runs and getting five hits in the series.

The Indians scored single runs in four separate innings, never coming up with a crooked number. In the ninth, the Indians had two opportunities to tie the game against Francisco Rodriguez, but both Carlos Santana and Travis Hafner struck out on full counts. Hafner's had a fantastic homestand, but thanks to the remainder of Interleague Play occurring in National League parks won't get more than nine plate appearances in the next nine games. 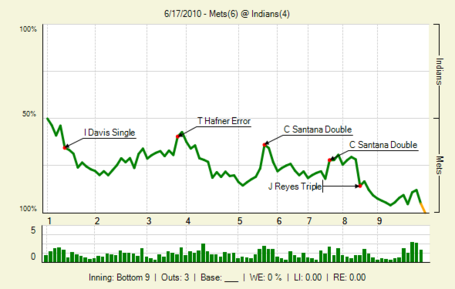