Mitch Talbot got pounded by Mets hitters, giving up 13 hits (5 of them for extra bases) and failing to get through the sixth inning. Mitch didn't have any issues with walks, which was somewhat surprising given that C.B. Bucknor was behind the plate; maybe he wasn't being fine enough with his location knowing that hitting a corner would be no guarantee of getting a strike called.

Tonight the Indians put Austin Kearns in center and Shelley Duncan in left to get another bat into the lineup. Or stack the lineup with right-handers against Mets left-handed starter Jonathon Niese. Or both. There's no good solution in the outfield right now for the Indians, just less bad ones, but I do think giving Shelley Duncan regular major-league at-bats does have some upside, in that they could figure out that Duncan could be a nice role player for the next 2-3 years. Duncan hit another home run tonight as well as badly misplaying a fly ball into a double in the third inning. Tradeoffs are everywhere in baseball, especially on the periphery of the roster, and given how badly the Indians need power, it's probably worth it to play Duncan in left and Kearns in center at least 2-3 times a week. Besides, the alternative is more Trevor Crowe, who doesn't even qualify as a tradeoff. 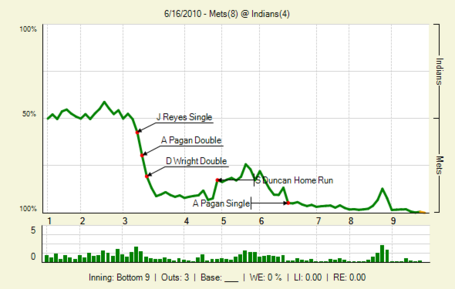