It's been a couple years since the Indians faced Johan Santana, and it was a little shocking to see how far his stuff had eroded. His fastball was barely touching 90, and there weren't a lot of swings and misses. Santana still has a good ERA, but his strikeout rates, while still decent, have fallen dramatically from his Minnesota heyday. Against a lineup that three or four years ago he would have dominated, he did go seven innings but gave up four runs and seven hits and struck out only one. To be fair, I'm judging him here against his prime, not against his current peers.

Justin Masterson's ending line (7 IP, 6 ER, 10 H) looked much worse than he actually pitched; a combination of bad defense and creative scorekeeping inflated the earned runs. Going into the fifth, Justin was pitching very well, and hadn't really been hit hard. The Indians were leading 4-1, and things looked promising. Then everything blew up in the fifth. To start the fun, he hung a pitch to Jeff Francouer, who laced a single to left field. Then Alex Cora put down a pretty bad bunt, but Russell Branyan inexplicably left his position and ran towards the ball...which wasn't more than 20 feet in front of home plate. Carlos Santana didn't have anyone to throw to, as Luis Valbuena couldn't get to first all the way from where he was positioned. It wasn't an error in the box score, but Branyan made a major mental gaffe. Next, Jose Reyes laid down a bunt, and this time Justin Masterson fielded it. He could have gotten the force out at third, but he didn't even look there, and threw towards first. I emphasize towards, as his throw was horribly offline, and went down the first base line, allowing a run to score and Reyes to go to second. The play was somehow scored a hit, which made all the runs in this inning earned. After Angel Pagan grounded out to first, David Wright hit a ground ball in the to the left of second base, Jason Donald was able to field it, but his throw to first was not in time, and two runs scored despite the ball never leaving the infield thanks to Reyes' speed. Ike Davis then took Masterson deep to put the Mets ahead 6-4.

The Mets would later score another run on Masterson, this one actually unearned thanks to Jason Donald's second error of the game. That run would be crucial, as Shelley Duncan would hit a two-run homer off closer Francisco Rodriguez in the ninth. Duncan hasn't gotten many starts in the past week, which seems strange, especially since Matt LaPorta is now in Columbus. 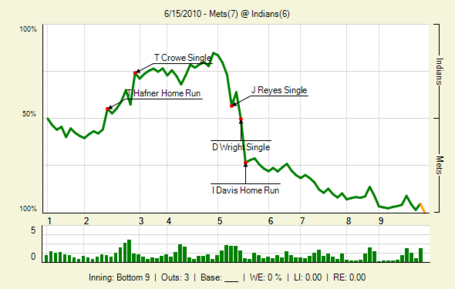