As Tom Hamilton remarked during today's broadcast, it's nice to see baseball get attention that isn't negative. After Stephen Strasburg's 14 strikeout, 0 walk major-league debut, his second start as a National received even more hype than his first one. Strasburg just about filled up Progressive Field, probably doubling what the Indians would have gotten had he not pitched. Nothing seems to draw in the curious better than the possibility of witnessing history, or at the least greatness. Would Strasburg strike out 20 this time? Pitch a shutout? As with any young player, the less you see him, the more your imagination runs wild considering what he's capable of.

While Strasburg's outing ended in the sixth inning after he lost the strike zone, it's easy to see why he was brought up after just 11 minor-league starts. His first pitch of the game was a fastball that measured 99 on the stadium speed gun. He regularly hit 100 mph throughout his start. He was able to spot his curve in the strike zone, a pitch that most of the time was at least 15 mph slower than his fastball. He struck out eight through five innings, then couldn't locate in the sixth. It looked like he was having problems with the mound, as his landing spot was close to David Huff's. After he walked Travis Hafner, the grounds crew filled in the hole, but then he walked Austin Kearns to load the bases. With his pitch count approaching 100, that was it for him.

David Huff also couldn't get through the sixth due to control issues, but in this case his pitches were not sometimes out of the strike zone, but also sometimes over the heart of the plate. After he retired the first two hitters of the inning, he walked Adam Dunn (presumably he worked around him, as Dunn had homered and doubled in his previous two at-bats), then gave up doubles to Josh Willingham and Ivan Rodriguez. He finished up his day with a walk to Mike Morse. Frank Herrmann came in to try to clean up the mess. Ian Desmond then hit a shot to deep center, but it should have been caught. Instead, Trevor Crowe took an awful route to the ball, tried diving for it, missed it, and the Nationals tacked on two more runs. Instead of the inning ending with a manageable 4-1 deficit, Crowe's misplay made the score 6-1. With a hitting line of .243/.311/.333, Crowe has to at least make the plays an average center fielder would make, but he isn't even making those.

To put a nice big red [bow] on this game, Tony Sipp imploded yet again, giving up three more runs in his inning. If the game had been competitive, he wouldn't have stuck around long enough to record an out, but Acta's trying to give Sipp enough opportunities to work through his problems. At this point, I think a demotion to Columbus would be best for him. Or maybe he's just hurt. 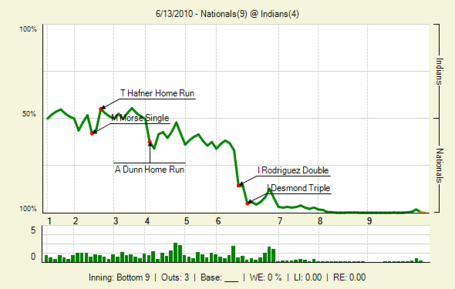