Tonight was Turn Back the Clock Night in Cleveland. The Indians wore their 1920 jerseys. The Nationals donned 1924 Washington Senators garb. And Fausto Carmona pitched like he did in 2007.

Carmona faced only 28 Nationals, pitching a complete game on 106 pitches (72 of them strikes), striking out seven, walking none, and giving up three hits. He recorded 13 ground ball outs in addition to the strike outs. It was his second complete game, but his first nine-inning complete game since May of 2008. Fausto has added more changeups to his repertoire in recent years, and tonight they made an excellent complement to his usual sinking fastballs, eliciting misses as well as weakly-hit grounders. He made a mistake to Ryan Zimmerman in the eighth, the subsequent home run accounting for his lone earned run.

Carmona threw to Carlos Santana instead of Mike Redmond, his usual catcher. Redmond isn't going to be around much longer, while both Carmona and Santana are, and it was good to see them clicking from the start. Santana, in addition to calling a great game, got his first hit (a double) and his first home run. Swapping out Marson for Santana makes the lineup a lot more formidable; tonight Russell Branyan and Jhonny Peralta hit sixth and seventh, respectively. Branyan hit his eighth home run tonight, continuing to give the Indians exactly what they hoped for from him. Peralta went 1-4 with a double, and has quietly brought his offensive numbers back in line with his career averages after having another dreadful April. 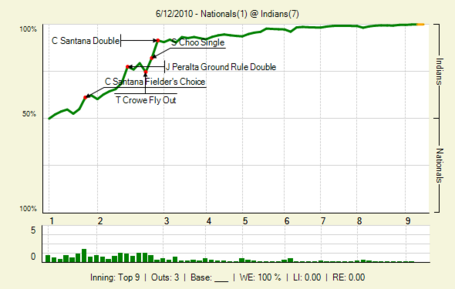