Stephen Strasburg's start on Sunday may get more national headlines, but tonight's game is much more important to Indians fans, for it marked the major-league debut of Carlos Santana. Normally a top prospect starts his career towards the bottom of the lineup, but Manny Acta placed Santana in the spot traditionally reserved for the team's best hitter. And you know what? Aside from Shin-Soo Choo and Austin Kearns, Santana may be Cleveland's best hitter even without having played a game. He probably would have been in the majors last year had his status been determined exclusively by his bat; he finished the 2009 AA season with a .290/.413/.530 line, and followed that up with an even better performance in AAA (.316/.447/.597). In his minor-league career, he's drawn more walks (333) than strikeouts (322), and unlike Michael Brantley, he's paired patience with power (.499 slugging percentage).

So why did he stay in the minors until the beginning of June? After all, the Indians weren't going anywhere, and they could have used his bat. The stated reason was that he needed to work on some of his defensive skills, although one unstated reason was service time; if Santana stayed in the minors until June, he wouldn't qualify for "Super 2" arbitration status after the 2012 season. And, like Strasburg, he just happened to make his debut days after that threshold had been reached.

In his first inning in the majors, the Nationals tested Santana's arm. Nyger Morgan reached first base on an infield single, and got a good jump off Jake Westbrook on his way to second base. But Santana made a strong and accurate throw to nab Morgan in a close play. That play proved key, for Washington would get two more doubles in the inning, and Westbrook was struggling to get the ball down early in the game. But thanks to the caught stealing, Jake got out of the first relatively unscathed. He'd get better as the game went on, and pitched into the seventh. Westbrook hasn't had consistent command on his sinker since coming back, but it seems to me that his changeup is light years better than before his surgery. He struck out five tonight, mostly on changeups.

Santana's didn't get a hit in his major-league debut, but he did score a run after reaching base on a fielder's choice in the first. He hit a sharp grounder to second baseman Adam Kennedy, who should have started a double play but bobbled the ball. Kennedy would prolong the inning further by muffing a much easier grounder off the bat of Russell Branyan. The Indians would take advantage of the opportunity, as Austin Kearns didn't miss a hanging curve, hitting the Luis Atilano offering into the left field bleachers for a three-run homer. The Indians would have several opportunities to break the game open off Atilano; in the fourth, after Kearns homered again, Travis Hafner walked, and Jhonny Peralta doubled to place runners on second and third with nobody out. The Indians couldn't get at least Hafner home. But in the sixth, the Indians chased Atilano from the game; Travis Hafner homered, and this time the Indians followed up a leadoff home run with more runs.

The one bad aftertaste to this otherwise satisfying win was another bad appearance by Tony Sipp. He came in to face Adam Dunn after Westbrook left, but walked him. Acta immediately pulled him, and although Chris Perez finished things out tonight, the Indians can't survive with just one good late-inning reliever. 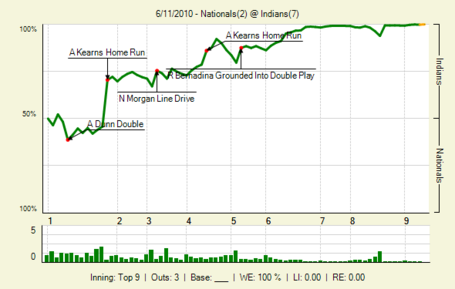