Remember when Damaso Marte was the projected Red Sox 3B of future before he was traded for Coco Crisp?

This was a fun game.  This was a weird game.  Most accounts will start by talking about the walk-off victory, the blown saves, or Marte's rare hat-trick of fielding errors in the first inning.  Before any of that, however, the game actually started with some very shaky pitching by the squint-and-you-can-see-it ace of our staff, Mitch Talbot.  He started off by allowing a deep gapper to Scutaro, then an RBI single to Pedroia, then a walk to Ortiz.  One run in, two men on, no errors.

uhhhhhhh, Did I say Damaso Marte? That would be, of course, Andy Marte, as Haggs and a chorus of my peers (superiors?) were happy to tell me

Marte uncorked the rest of the inning, committing three errors which led more or less directly to three more Boston runs.  This was Marte's first start since returning from the DL, and beyond that, only his third start since April and his third start of the season at third base.  Still, why make excuses?  The guy had an unbelievably bad inning.  It's awful to watch, but it happens.  He also shook it off, making a few very fine defensive plays and starting a key rally later in the game.

Talbot looked like he could have gotten out of that first inning with only that one earned run allowed, but we can't know that for sure — after all, he started off that first inning double-single-walk, before any errors, and he allowed two more line-drive singles to start the second and another to start the third, plus a second walk and a second double in between.  So even if you count each reached-on-error guy as an out, Talbot still allowed nine baserunners before getting his ninth out.  He wasn't good.

Taking nominations for who in the Tribe lineup is capable of getting a hit off Lester. I'm setting over-under4 for hits tonight at 3.

By the time Talbot found his footing in the third, the Indians were looking at a dead-end game, losing 5–0 with only 1.5 innings played.  The Indians decided to play a full nine innings anyway.  The Red Sox, oddly, did not.  Anderson Hernandez, looking oddly similar to a younger Jhonny Peralta, broke up Lester's perfect game with a single to open the third.

Three more solid hits and a sac-fly followed, and the Indians had put up a "3" on the scoreboard, without any help from Boston's defense.  They put up another "3" in the 6th; Marte drove in the club's fourth run, and a few batters later, Marson drove in Marte and Duncan to take the lead.  And then Marson stole a base.  Like I said ... fun game, weird game.

Lester flips his glove disgustedly into dugout, trying to remember last time a guy batting .187 got such a big hit as Marson off him.

There aren't many types of matchups the Indians expect to win these days, and "dueling bullpens" sure isn't one of them.  Even so, there were smarty-pantses Jensen Lewis and Frank Herrmann and roughneck Chris Perez, blanking the pricey Red Sox for four more innings while the rag-tag Indians lineup took the lead back.

And there, finally, was Kerry Wood, proving he still has the stuff to baffle bats utterly in one moment, and then proving he still has the lack of command hit one guy in the foot and serve up a big meatball to another guy in the next moment.  This game was won, really won.  It was only a one-run lead, but Boston had been pretty dormant for seven innings, and there were two outs and nobody on base, and Wood looked like ... well, he looked exactly the way he was always supposed to have looked when we signed him.

Beltre may have just delivered his biggest hit of season for Sox. This would have been an ugly defeat. Ain't over yet, of course

If we weren't used to such astoundingly stupid failures, we'd have been shocked by the fact that Wood blew the lead just four pitches later.  As it is, it was just more weirdness on a weird night.  Between Marte's errors and Talbot's shaky start, it seemed the lineup and bullpen had already had to win the game twice just to get this far.  After all that, the lineup would have to win it a third time to get the victory in the books.

We had Crowe, Choo and Kearns leading off the next inning, and weirder than weird, it actually felt on some level like these were actually the people we wanted to have coming up to the plate.  For one thing, it's not like we've got a bunch of great hitters on the active roster.  For another, these same three batters had driven in our first three runs on successive at-bats back in the third inning.

So Boston put in some young dude to pitch, guy who throws 100 mph and doesn't even need his finger to be amputated.  Disgusting.  Crowe wisely worked the walk rather than waiting for "his pitch," which we all know did not exist in this situation.  Choo followed up with a double, no big surprise there.  Just like that, the winning run was on second base with nobody out, and Kearns worked another walk to load the bases.

In a weird way, the one thing going for us now was with this kid throwing 100 mph, another strikeout was way more likely than a double-play.  And so was a game-tying wild pitch, for that matter.  Peralta got creative, though, and went for the infield popup in foul territory.  (So annoying watching Victor catch that foul — whose side is that guy on, anyway?)

So now we were down to one out, and Branyan was back up at the plate.  He'd pinch-hit for Marte in the 7th and come up in this exact situation — two outs, bases juiced — and struck out.  Again, no big surprise there, but now the fastballs are 100 mph, so expectations are low.  Somehow, though, Branyan fisted a bloop over the head of a shifted Pedroia, and Crowe and Choo scampered home easily.

Sox leave the field to the sound of "Cleveland Rocks" 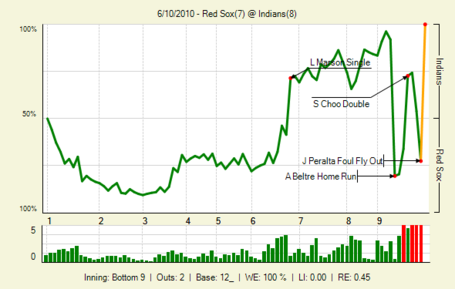