Jake Westbrook pitched into the eighth, Chris Perez pitched to one batter in a tight spot, and Kerry Wood got a one-inning, four-out save thanks to Russell Branyan booting an easy grounder down the first base line.

Detroit's Austin Jackson started things off by seeing 12 pitches in his first at-bat, frustrating Jake Westbrook's typical strategy of getting an out by the third pitch of an at-bat. Westbrook started his outing in a pitch count hole, but made up pitches with short innings in the middle of the game. Westbrook's modus operandi is easy to understand but difficult to execute, because for it to work, you must prove to hitters that almost every pitch you throw will be in the strike zone. Because of his reputation as a strike-thrower, Westbrook got a lot of balls in play, though more of them ended as air outs than normal. Still, Jake got more efficient as the game went on, and by the time he started the seventh, he had thrown about seventy pitches.

Jeremy Bonderman, once a strikeout thrower, is now trying to reinvent himself a command pitcher after a couple major injuries. For the most part he matched Westbrook inning for inning, but he made two mistakes, home runs by Russell Branyan and Shin-Soo Choo. Choo's home run came on a hanging breaking pitch in his third at-bat of the night; Bonderman had had success jamming him inside with fastballs all game, but for whatever reason he tried to change things up in the sixth inning.

The Indians pushed across an insurance run in the eighth off Bonderman when Mark Grudzielanek singled home Travis Hafner with a ground between third and short. Thanks to Branyan's ninth inning error, the Indians would need it. Wood got  the first two outs rather easily, then got Carlos Guillen to ground to first base, but he reached when the ball got past Russell. After the Indians allowed Guillen to take second, Wood walked Brandon Inge, and after a long battle, backup catcher Alex Avila hit a line drive single to plate Guillen. Now both the tying and winning runs were on base, but Wood got Ramon Santiago to fly out to end the drama. 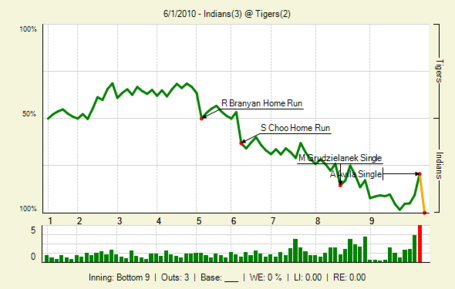