The Indians ended their 5 game losing streak with a surprisingly well-rounded game. Mitch Talbot was not at his best but he did stick it out through 5, giving up 1 run in the first, 1 in the third, and 2 in the fifth. However, Talbot didn't show any progress on his season long K:BB problems, posting a 4:4. Detroit countered Talbot with their big offseason acquisiton, Max Scherzer, who looked as bad as he has most of the season. Indians' hitters tagged him for 9 hits and 5 runs in only 5 innings. Scherzer struggled to find the zone all day and his fastball, which wasn't great in the first at 93 MPH, had lost a couple of ticks by the fourth and fifth innings. Detroit ought to be concerned with Scherzer as a future member of their rotation: he doesn't just lack results right now, he lacks stuff.

The Indians got offensive contributions up and down the lineup today, notably getting a three hit game from Mark Grudzielanek and a two RBI triple from Andy Marte. When Talbot handed a 5-4 lead over to the bullpen in the fifth, it was hard to imagine the Indians winning without scoring a few more runs. The offense did come through with two insruance runs in the seventh but the bullpen also, shockingly, managed to shut out the Tigers. Tony Sipp looked especially good again, striking out the side in the eigth. That makes Sipp's K:BB in May 7:2. Chris Perez, as is his wont, made the ninth an adventure, letting the 8 and 9 hitters reach base, but he settled in after a visit from Tim Belcher and sat down the top of the lineup in order. 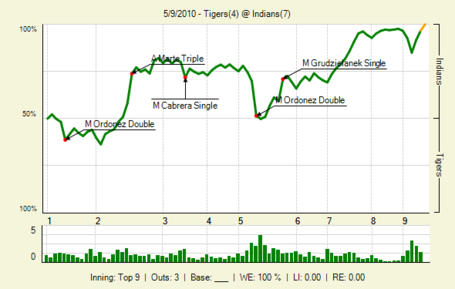