Today the starting pitching was pretty good, and the offense was decent. Fausto Carmona went six innings, and though it wasn't an easy outing, he did a good job defusing rallies that would have sunk him a season ago. The starting staff in general has been much better than expected, with a starter occasionally winning a game all by himself, and even with a mediocre start eating enough innings to not overload the bullpen.

After Carmona left, Tony Sipp retired four batters without giving up a run, and then turned the game over to Chris Perez in the eighth. Perez hadn't worked since May 1, and has only made only three appearances since April 24, so he needed the work. Perez didn't have any problems in the eighth, and retired the first two batters in the ninth without any problems. In fact, three different times Perez was one strike from ending the game. But almost as quickly as Perez got the first two outs of the innings, he gave up the lead. Fred Lewis doubled, and then Luis Valbuena couldn't field a grounder. Then Adam Lind crushed a three-run homer.

If the mark of a good team is that they can win in different ways, the Indians are the definition of a bad team. Their good parts aren't all that good, and their bad parts are really bad. 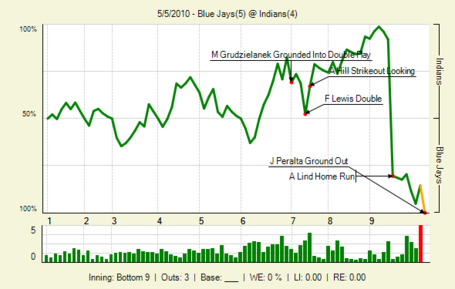