The Indians faced another good left-handed pitcher, actually scored five runs off him, but Jake Westbrook and the the bullpen couldn't keep the Blue Jays bats at bay. The good news was that Grady Sizemore and Travis Hafner had good offensive games, both of them getting two hits apiece off of Ricky Romero, who didn't post a quality start for the first time all season.

Jake Westbrook, despite a balky back, did make his start, but couldn't get through the fourth. He had some long innings early on, including one extended because he didn't make an accurate throw to start a possible double play. On his 85th pitch of the night, he walked Vernon Wells to load the bases (this coming after he'd given up three runs in the inning), and Manny Acta pulled the plug. Jamey Wright cleaned up another mess by striking out Kyle Overbay, but he gave up a run in the fifth to tie the game at five.

Things got worse. Jensen Lewis walked two with two outs, and gave up a double to the suddenly power-hitting Alex Gonzalez, which plated the go-ahead run. Lewis got out of the inning, and next came Rafael Perez. Oof. Perez couldn't record an out, and was pulled quickly. I guess the next step is either a spot on the bullpen bench, or the waiver wire. The Indians have been very patient with Rafael, bringing him back after a very poor 2009 season, but I think his time's about up.

Hector Ambriz got into the game, and pitched two scoreless innings, with two strikeouts in his third appearance with the Indians. That's good news. 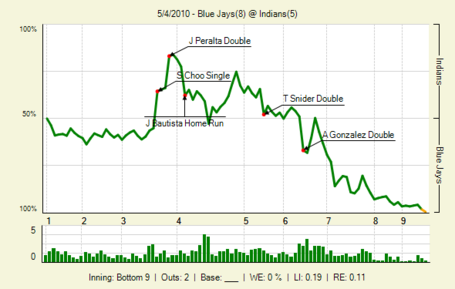