For all the travails that I thought the Indians would be putting us through, I didn't have this particular one in mind. The pitching has been in most cases decent, but unfortunately the offense has been the worst in the league. Some of the young players haven't progressed, but that will happen. What is concerting has been the performances of Grady Sizemore (.207/.271/.310) and Travis Hafner (.197/.314/.324). Some of the problems have been due to the lineup facing more left-handers than normal (Hafner, for instance, has had 53 plate appearances against right-handers, and 33 against left-handers, despite sitting a couple times when a southpaw was starting), but neither player is hitting for power against right-handers, either.

Tonight the Indians faced another left-handed starter, which portended a poorer offensive night to begin with. This particular left-handed pitcher has dominated the Indians in his brief major-league career, and tonight he happened to pitch just about as well as any pitcher has this season. He went eight innings, struck out 10, and for a while looked like he was going to throw a perfect game. Until the seventh, the only hard-hit ball came on a Matt LaPorta line drive. The Indians avoided infamy by drawing two walks with one out in the seventh, and then getting their only hit off Cecil. So instead of a franchise-worst offensive performance (no pitcher had thrown a perfect game against the Indians), we just got a (hopefully) season-worst effort.

Mitch Talbot pitched badly only in comparison with Cecil; he allowed four runs through eighth innings, then inexplicably came out for the ninth and gave up a quick home run to John Buck. Manny Acta then finally pulled him (after throwing his 110th pitch), and Tony Sipp finished the game. Though Talbot has posted an excellent ERA (2.05) coming into tonight's game, he's only struck out a sub-Sowersian 2.4 batters per 9 innings. That's going to have to change for Talbot to have future success in the rotation, for a strikeout rate that low just isn't sustainable for a major-league starter. 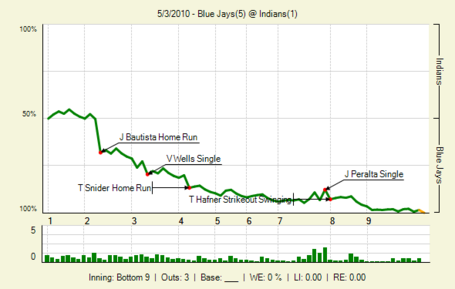