If one is an anomaly and two is a trend, then what's four horrible bullpen outings in four games? This was actually a close game in the seventh inning. Mitch Talbot wasn't at the top of his game; he was almost continually pitching with runners on base, but he left the game having given up two runs in 6.1 innings. And it's not like he bequeathed a major jam to the pitchers that followed him; he left after Derek Jeter singled with one out and nobody on.

Zombie Perez came in to get Curtis Granderson, a favorable matchup for the former standout reliever. But Granderson singled through the right side, and Zombie made things worse by uncorking a wild pitch, taking away the possibility of a double play. He was removed, after intentionally walking Mark Teixeira, in favor of Chris Perez. Chris had the unenviable task of facing Alex Rodriguez with the bases loaded, but still, these are the situations you expect your best reliever to come into and excel in. But the only category Chris excelled in today was runs given up. He gave up a grand slam to Rodriguez, and then served up a home run to Robinson Cano. After that, the Yankees crossed home run plate so quickly I couldn't make out the particulars.

Lou Marson continued to impress with his throwing arm. He caught two Brett Gardner twice today trying to steal second, and is now 13-for-24 in catching would-be base stealers. Jhonny Peralta hit his 100th career home run in the second inning, which places him in a tie for 22nd place with Joe Gordon on the all-time franchise list. 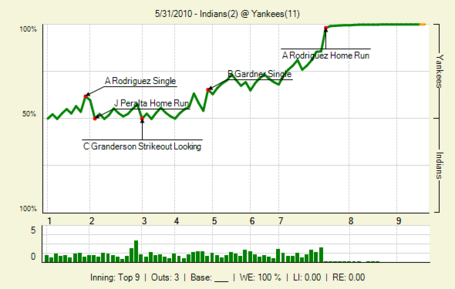