In the third inning of today's game, Alex Rodriguez hit a line drive that hit David Huff flush on his left temple; the ball ended up down the right field line, and Huff immediately fell to the ground and didn't move. A sold out Yankee stadium became deathly silent as Huff remained face down, and the training staff immediately rushed to the mound, with his teammates behind them. It was a scary sight for anyone watching the game. Huff was placed on a stretcher, and as he was carted out of the stadium, he gave a thumbs up to the crowd. He underwent a CT scan at a nearby hospital to determine if there was brain damage, and thankfully the test came back negative.

At the time Huff left the game, the Indians were trailing 3-1. Aaron Laffey was brought in to replace Huff, and hopefully go 4-5 innings so that the Indians wouldn't have to burn up the rest of the bullpen. He was shelled, giving up 6 runs and only going 1.1 innings. Laffey's meltdown will mean that the Indians will have to make a roster move before Sunday's game to get at least one fresh arm on the roster. Laffey's problem was that he nibbled around the strike zone, falling behind on hitters, and eventually putting them on via the walk. He only gave up two hits, but walked 3 and and hit a batter. He left in the fourth, and by the time the inning was over, the Yankees led 9-3.

Meanwhile, the Indians' offense did a good job against CC Sabathia, making the LGFT work hard to get through several innings. But it seemed their efforts would fall well short, as Sabathia left the game with the Yankees up 5. But this day it wouldn't be just the Indians bullpen that imploded. David Robertson hit Trevor Crowe to start the seventh, and was pulled after Kearns singled home the first run of the inning. Two relievers later, Russell Branyan flew out to center for the second out, and the Indians still trailed by four. But after Joe Girardi brought in his fourth reliever of the game, the inning really got interesting. Joba Chamberlain came in to face Mark Grudzielanek and, if necessary, the rest of the bottom of the order, but couldn't retire a batter until he struck out Shin-Soo Choo. Five consecutive Indians reached base. Grudzielanek singled, Matt LaPorta walked, Marson and Donald doubled, and Trevor Crowe, who had started the inning, reached base for the second time with a single. By the time the inning was over, the Indians had reached the 10-run plateau for the first time all season, plating seven runs to take a 12-10 lead.

Chris Perez went a much-needed two innings to get the game to Kerry Wood. Branyan homered in the eighth to push the lead to three runs, and it looked for a time that that run might be the difference in the game. Wood walked pinch-hitter Curtis Granderson, and later gave up a double to Derek Jeter to bring the tying run to the plate in Nick Swisher, New York's hottest hitter. But Wood struck out Swisher, and the Indians won a long and arduous game. 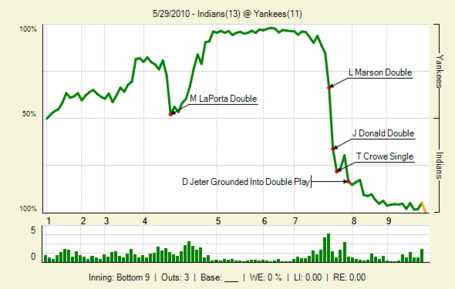