The lineup that Fausto Carmona faced tonight was not as good as New York lineups in the past, or even near as good as the Yankees could put together with the players currently on their roster. There was no Alex Rodriguez, or Jorge Posada, and Mark Teixeira has been struggling. Of course, you could say exactly that about the lineup Phil Hughes faced - no Sizemore or Asdrubal Cabrera, and Carlos Santana still in the minors. But New York still had two hot hitters in the middle of their lineup, and that was enough to win.

Carmona was hurt by a blown call by (who else?) umpire C.B. Bucknor in the second. Robinson Cano was called safe at first by Bucknor, but replays clearly showed that he was out. So Carmona faced Nick Swisher, perhaps the Yankees' best hitter nowadays, with a runner on, and pitching from the stretch. Swisher hit a no-doubt two-run homer into the upper deck, and the Indians trailed the rest of the way. Fausto would lose command of his fastball in the sixth, leading to another two runs, though the damage could have been much worse.

Any hope for a comeback was quashed in the seventh, as Tony Sipp loaded the bases, then gave up a grand slam to Robinson Cano, the other hot hitter in the lineup. It was by far Sipp's worst outing of the year; he gave up more earned runs (4) in that one appearance than he'd given up all year (3) to that point.

The Indians scored single runs in the fourth and seventh innings. A key at-bat on the offensive side came in the fourth, after Jhonny Peralta had doubled home the first run of the game. Luis Valbuena, hitting with runners on second and third and two out, had an excellent at-bat against Hughes, but couldn't pull the trigger on a curve high in the strike zone. Valbuena has collected three hits in the last four weeks. 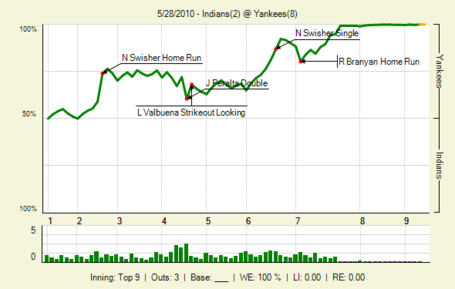