The Indians head into today with the 3rd worst record in the league (better than Baltimore! better than Houston!), their starting SS and CFer on the DL, and a team trendline heading decidedly in the wrong direction.  So, after our opening volley, we will focus today's 6-pack more on the future than on the present. 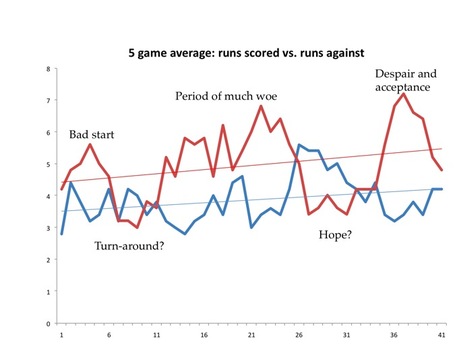 So this is a chart showing a rolling 5-game average of runs scored (blue) vs. runs against.  As you can see, after its dismal beginning, our offense has shown some signs of improvement....although the injuries to Cabrera and Sizemore might be putting an end to that.  Unfortunately, the positive start from our pitching staff has been deteriorating at a greater rate than our offensive improvement.  The result?...not good.

2. You got to change your evil ways

The Indians future, in the form of Carlos Santana, is going to be the present pretty quickly.  Santana's arrival should provide some excitement and some immediate offensive uplift.  But Santana is not just going to be bringing his bat, and it is worth recognizing that not every aspect of Santana's game is likely to be initially brilliant.  Kevin Goldstein had this to say about Santana earlier in the week:

Obviously he can hit, but scouting reports of the defense have been pretty rough this year.

Santana has actually allowed only 1 passed ball this year, but opposing runners have already stolen 26 bases off him against just 6 caught stealing.  Additionally, don't forget that our supposedly studly AAA starting staff has not exactly performed at its peak this year, something for which Santana bears at least some indirect culpability.  Perhaps just coincidentally, it is Santana's fellow Latin American pitchers that have performed most poorly for Columbus this season (Rondon, Gomez, Pino - or maybe it is just a Venezuelan thing...).

3. Chun-Hsiu Chen is the most interesting man in the world

Probably not, but he certainly has come out of relative obscurity this season.  As far as I can tell Chen was not even noteworthy enough to make it onto Tony Lastoria's top 50 prospect list this past off-season.  Now, the 21-year old Taiwanese catcher is fourth in the Midwest League with an OPS of .931 (In May alone he has hit .417/.475/.722 with 15 extra-base hits).  Given his position and international origin you could even consider Chen to be age appropriate.

4. Moses Cleveland sailed into Lake Erie on the tradewinds...

With the Indians season not in doubt, it is already possible to begin speculating on who will be shown the door mid-season and who might step up and fill their spot.  Paul had his take on this subject up on the DiaTribe yesterday.  I'm less certain there is going to be a massive upheaval.  If he pitches well, Jake Westbrook will almost certainly be gone.  But much of the Indians other useful detritus is just that, useful but not essential.  Austin Kearns is no Victor Martinez.  It remains to be seen whether we can Ryan Garko guys like Kearns, Branyan, Duncan or even Peralta off on other teams during the trade season.  I think back to Jamey Carroll last season, who in my mind was one of the Indians more useful pieces, who didn't ever get moved.  It would certainly be great if we could pass a few of these guys off, but I think unless there is significant pressure from a guy like Michael Brantley to clear a spot, we might see Shelley Duncan or Austin Kearns for most of the season.

5. The Price is trending upwards

One of the least-mentioned arms we brought in last season was Bryan Price (aka, the "one other guy" in the Martinez trade with Boston).  After working out of the rotation last season with mixed results, the Indians put him in the bullpen to start the '10 season.  He struggled a bit in April, particularly with a few long-balls, and then made a short DL stint.  He allowed 2 runs in his first appearance post-DL in May, but since then has put together 6 appearances in which he has allowed just 2 hits, 0 runs, 0 walks and 7 Ks in 7 innings of work.  I'm not going to get too excited about a AA reliever, but I am happy to see any evidence of the Indians developing players into roles they can succeed at. 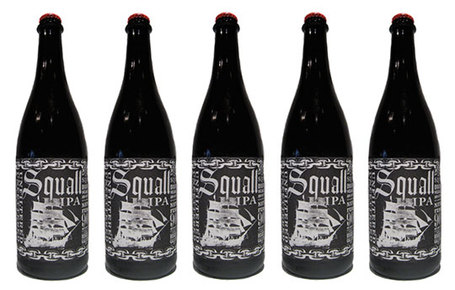