The Indians didn't take advantage of an incredible piece of good fortune, though they almost pulled out the game anyway.

White Sox starter Mark Buerhle has one of the best pickup moves in the game, and like all good moves, it's a borderline balk every time it's used. Even so, he's only balked 10 times in his career, and since his first full season hasn't had more than two balks called on him in a season. Which makes sense; when umpires first see a pitcher's quasi-balk move, they're more likely to call it a balk, and once they've seen it and deemed it not a balk, then he's free to use it. But not today, because Joe West for some reason decided to call a balk on Buerhle in the second. I didn't see anything different in that particular move that differentiated it from all the other moves I've seen from him over the years, so I'm guessing that Joe West just decided that today he'd mix things up by calling it. West is infamous throughout baseball for antagonizing players once they've got on his %^$#% list, and so he called another balk on Buerhle in the third inning, looking for an excuse to toss him, got it, and threw out Ozzie Guillen* as an added bonus. Normally that kind of behavior from an official would result in a fine or a suspension, but MLB doesn't seem interested in butting heads with the umpires, whether it be with the strike zone, speeding up the game, or, in this case, disciplinary actions. Rant over.

So the Indians, instead of having to face Buerhle for another 3 or 4 innings, got to face Randy Williams and Tony Pena instead. What did do with this opportunity? They mostly squandered it. Jhonny Peralta drove home a run in the fourth with a sacrifice fly, but nothing else came of that inning, or any other for that matter until the ninth. From the point Buerhle left to when Jenks entered (5.2 IP), White Sox pitching gave up 1 earned run on five hits.

Even with the missed opportunity, the Indians were still one hit from winning the game, or one sacrifice fly from tying it. The Indians loaded the bases with nobody out against Bobby Jenks, then scored one run on a bases-loaded walk and two more on a Shelley Duncan single. Then Manny Acta overplayed his hand, having Trevor Crowe bunt the runners on first and second over a base. Yes, Crowe could have grounded into a double play, but the two hitters who would be batting with the bases loaded, assuming Choo would be walked, were Austin Kearns and Russell Branyan, and they strike out often. Crowe executed the sacrifice, Choo was walked, and Kearns fouled his pitch off instead of hitting a fly ball. He'd strike out, Branyan would fly out, and the White Sox escaped with the victory.

*Of course most of you are wondering what Ozzie's reaction was after the game. He didn't disappoint. 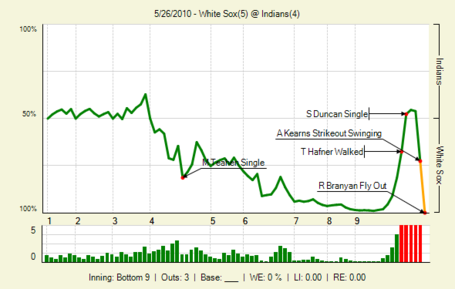