In his last offseason as Indians General Manager, Mark Shapiro didn't make any splashy moves or trades, but the players he did bring in have outperformed many of the players already on the roster. Austin Kearns, Russell Branyan, Mark Grudzielanek, and even Shelley Duncan have been productive players for a rebuilding team. But none of these guys will be on this team next season, let alone in 2012 or 2013.

Then there's Mitch Talbot. The holy grail for a small-market GM is to find a prospect with little to no service time but at the same time ready to produce in the majors. Even rarer still are pitchers with that profile, the scarcity of arms being what they are. Talbot's 26 years old, and realistically could have pitching in the majors since 2007, but thanks to a combination of Tampa Bay pitching depth and injuries in 2009 came to the Indians with just 16 days of major-league service time. If he pans out, the Indians are going to get 6 full seasons of a mid-rotation starter, a priceless treasure for a low-payroll team. Through six innings tonight, Talbot had given up just 2 base runners, both on hits, and struck out 4. His pitch count was in great shape, so I don't think his seventh inning struggles had to do with him being tired. He lost his shutout in the seventh, and was actually very lucky to just give up two runs, as Mark Kotsay got thrown out trying to stretch a double into a triple.

Before the game, Jake Peavy remarked that the White Sox should be expected to roll a team like the Indians. While I agree with Peavy that the Indians aren't a very good team right now, I'd also point out the fact that this pathetic team happens to be just 1.5 games worse than his team. And the other problem with Peavy's statement is that, well, he didn't back it up; the Indians scored 6 runs off the former (in the) NL West standout. Jason Donald hit his first major-league home run off Peavy in the third, and Shin-Soo Choo followed with a bomb of his own two batters later.

Lou Marson has been hitting better in the month of May, paving the way for his smooth transition to starting Columbus catcher, but Luis Valbuena has been mired in an awful slump, and has been a major drag at the bottom of the lineup. If Asdrubal Cabrera hadn't gone down, he probably would have been optioned down a week ago. But Luis did manage to drive home two runs, both on weakly-hit outs. In the sixth, he fouled out to medium right field, but Branyan tagged and scored on the play. In the bottom of the eighth, he pulled off a suicide squeeze to drive home a key run. The squeeze was, in retrospect, a very appropriate call, given the score (3 run lead) and how the batter at the plate was hitting (.108/.267/.135 in the last 28 days). 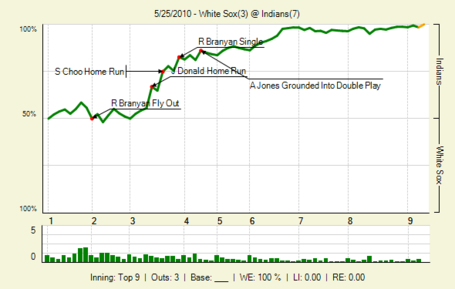