Justin Masterson came extremely close to having to leave the game in the first inning. He had thrown over 40 pitches, only seemed to be able to throw his fastball anywhere near the strike zone, and he looked like someone who had no confidence. Thankfully, when he grooved a pitch to Chicago's eighth batter of the inning, it was 43-year-old Omar Vizquel at the plate and not practically any other hitter in the majors. Omar! hit the ball to the warning track (probably the farthest he'd hit a ball all season), and Masterson was able to walk off the mound and regroup. The damage was done, but that Masterson was able to go three more innings saved the bullpen for the remaining two games of the series. A 6-inning bad start only hurts the team for that game, but a 1-inning bad start could hurt the team for the next 3-4 days. Masterson has probably joined David Huff on the Demotion Watch; the Indians have two option years left on him, so it makes sense for him to work on his delivery in Columbus rather than tinker while facing major-league hitting.

Aaron Laffey soaked up three innings, giving up one run on two hits, and got the game to the eighth inning. If the Indians had scored another run or two, they would have had a shot, but after John Danks left, the offense was completely shut down by the White Sox bullpen. Chicago tacked on another run in the ninth off of Hector Ambriz on an Alex Rios home run. 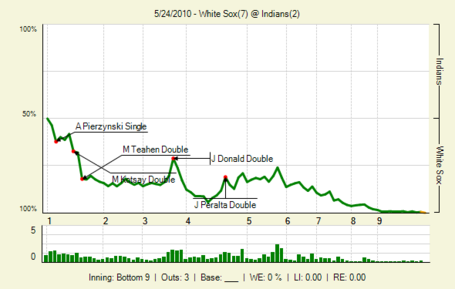