The pitching stepped up today, with David Huff notching a quality start and the bullpen pitching three scoreless innings. I think if Huff had laid an egg, he was going to be out of the rotation, so today's solid start was exactly what he needed. All three of the runs he gave up came off the bat Scott Rolen. Rolen hit a two-run homer in his first at-bat, just missed one in his second, and hit his second home run in his third at-bat. Huff only walked one though, and was spotting his low-90s fastball in better spots than in previous starts. David has now given up 10 home runs, and if you project that out to a 30-start season at 1.25 home runs per start, that's 38 home runs for the season. Granted, large home run totals aren't necessarily the mark of a bad pitcher, but it's a mark of concern for a guy who's also not striking out many hitters (3.4 SO/9).

The margin of victory should have been much more than that, as the Indians had many opportunities against Reds starter Homer Bailey and, after Bailey left with a shoulder injury, Micah Owings. The Indians jumped on Bailey in the first for two runs to tie the game, and was close to taking the lead off him when the young right-hander was pulled from the game with shoulder stiffness. Micah Owings was brought in to soak up some innings, and had problems throwing strikes; he walked 5 Indian hitters, but managed to exit the game without giving up an earned run (the Indians did take the lead in the third, but that run was charged to Bailey). After Rolen tied the game with his second home run, the Indians re-took the lead in the bottom of the sixth thanks to a Jhonny Peralta two-out single.

Today was the first game Manny Acta could make use of his late-game relievers in the way they were projected before the season. Chris Perez got two outs in the seventh, Tony Sipp finished the seventh and retired the side in the eighth, and Kerry Wood notched his first save of the season with a pretty good ninth inning. 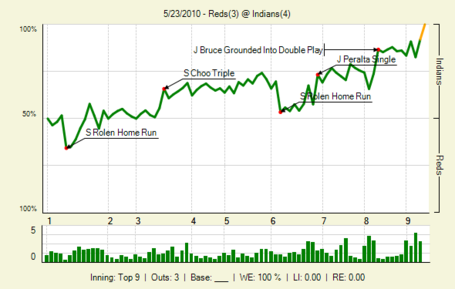