Thanks to the public's insatiable appetite for the Mets and Yankees, one of the better local draws of the season wasn't shown in Cleveland or (I assume) Cincinnati. Nice job, MLB and FOX.

The pitching matchup featured two young Dominican fireballers. Both went six innings, but Johnny Cueto gave up fewer runs and had better defense behind him. Fausto Carmona again gave up two runs in the first, the second one unearned because of a bad throw by Trevor Crowe. Crowe has been surprisingly good at the plate in his first week as the everyday center fielder, but he's made several poor plays in the field. As was brought in the comments, the outfield defense probably gets better if you have he and Austin Kearns swap positions.

The Reds tacked on another two runs in the fourth on a Laynce Nix home run. Carmona yielded his second unearned run in the fifth; Jhonny Peralta let a bouncing grounder play him, allowing Brandon Phillips to reach, and Phillips was driven in with a Scott Rolen sacrifice fly.

Cueto cruised through the first five innings, but had to throw a lot of pitches in the sixth. Travis Hafner capped off an excellent at-bat by getting around on an upper-90s fastball and depositing it into the right field seats. It's been a slow process, but it seems that Hafner's pitch selection has gotten better with each passing series.

Shelley Duncan collected his first hit as an Indian when he singled in the eighth, joining a short list of father-son duos to get hits with the franchise.

The Indians made things very interesting in the ninth, pushing two runs across off Reds closer Francisco Cordero and bringing the winning run to the plate twice. But Cordero struck out Shin-Soo Choo looking, and got Austin Kearns to line out to end the game. 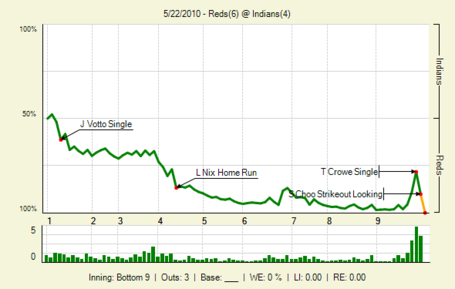