In an appropriate coincidence, this clash of the midgets of the Midwest started just after high noon. The winner would leave in fourth place. The loser would leave in last place, and would not go home, since there would be more than four months of the regular season to play.

The Indians tapped Mitch Talbot to pitch this crucial game, mainly because he was the next guy in the rotation. Talbot cracked under the pressure of the moment, throwing his worst game of the season. Or maybe he didn't feel any added pressure, but just couldn't keep his pitches down. It's a toss-up. Talbot gave up 6 runs in the first first three innings of the game, and gamely stuck around until the sixth, though those last three scoreless innings came the gosling had left the barn, or the horse had drunk the spilled milk, or something like that. Yes, the bullpen will be more rested for the next series against some random NL team, but that's a small consolation. Very small. Microscopic.

Now comes the long rest of the season. There may be future glory between now and September, but this devastating loss will stick to this team like George Brett's bat. He was a former Royal, you know. 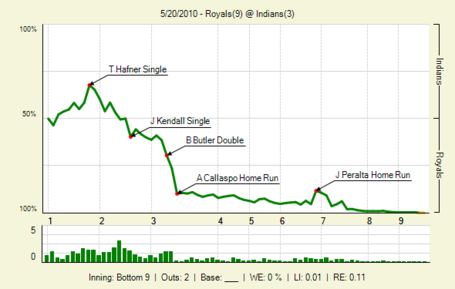