Justin Masterson and Kerry Wood. Two pitchers with excellent stuff. One's a former reliever that's now a starter. One's a former starter that's now a reliever. Masterson had a secretary named Wood, and Wood had a secretary named Masterson. OK, I made that last sentence up. But both did pitch in tonight's game, and both had disappointing performances to different extents. Masterson fought his delivery through five innings, throwing many more pitches than a pitcher with his stuff should have to in order to get outs. When he left the game was still tied, but it wasn't the runs that pushed him out, it was the pitch count. There were some occasional promising signs; against left hander Mitch Maier he threw a fastball  for a strike under the arms, and then struck him out on a slider in about the same spot. That sequence is how he should be attacking left handers who are looking outside.

At the other end of the game, the performance wasn't as subtle. Kerry Wood came into the game to attempt his first save of the year. He'd been pitching pretty decently in setup roles the past week, but tonight his fastball, though it sat in the upper 90s, had no movement whatsoever. Mike Aviles took a high Wood fastball down the right field line and ended up on third after the ball bounced around in the corner. Wood then compounded matters when he dove for a David DeJesus grounder, then losing the ball when he attempted to go home with it. Aviles wasn't going on contact, so he should have gone to first for the easy out. Things got much worse from there. Billy Butler stung a double off the right field wall, and now not only was the game tied, but the go-ahead run was at third with nobody out. Kerry got Jose Guillen with a curve, and then intentionally walked Alberto Callaspo to set up a force at any base. That backfired, as he walked in the go-ahead run, missing wildly on 3-1 pitch to Mitch Maier. Then Yuniesky Betancourt removed all doubt with a bases-clearing double over the drawn-in outfield.

More bad news came before the game. Grady Sizemore, who had left Sunday's game, was placed on the Disabled List with a deep bone bruise on his knee, and there's a possibility that he might be out much longer than the minimum 15 days. This came a day after Asdrubal Cabrera went on the DL with a broken forearm; Cabrera is going to be out at least two months. So tonight Trevor Crowe and Mark Grudzielanek were penciled in at the top of the order, a configuration that we unfortunately might be seeing for a while. This might be Trevor Crowe's biggest opportunity in the pros, an uninterrupted 15-30 day stretch as the starting center fielder for a major-league team. Unless he starts walking like crazy, I still don't see him as anything more than a decent fourth outfielder. I see more possibilities for Jason Donald, who's going to get a better opportunity at shortstop, though he's ultimately auditioning for the second base job. He made an excellent diving play to save a run in the fourth, and another stop on a ball that Luis Valbuena doesn't get close to. 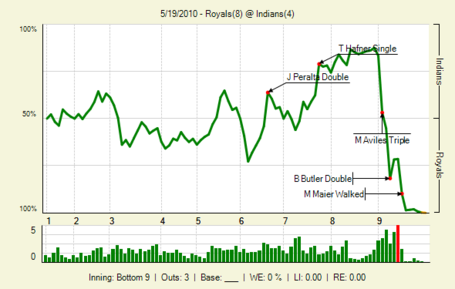