In the bottom of the first inning, the Indians employed the shift against Hank Blalock, with Asdrubal Cabrera positioned just to the right of second base, and third baseman Jhonny Peralta to the left of the bag. Blalock hit a grounder just about equidistant between the two players, and both went for the ball. Cabrera nabbed the ball diving to his right, and Peralta's knee fell on Cabrera's extended left arm. Cabrera remained on his stomach and in excruciating pain. He left the field on a cart with a temporary splint on his left forearm, and although the Indians haven't officially said anything specific about the injury, it's almost a given that Cabrera will be out quite a while. While his bat hasn't been that great early this season, he's been excellent defensively, the only starter on the infield with above-average range.

When Cabrera went down with the injury, Fausto Carmona was in the midst of a first inning jam. He had already given up two runs, and with Blalock reaching, the Rays had another two on with one out. He was leaving almost everything up in the zone, and he was getting hit hard. But he settled down, got the next two hitters to ground out, and didn't allow another hit until the seventh inning. Carmona seems a much more confident pitcher this season, able to self-correct his delivery if he gets into a rut. Last season, he might not have recovered from a start like tonight's. He not only survived the jam, but if not for a Mark Grudzielanek error, would have finished seven innings. He struck out seven, and more importantly, only walked one. That's a strikeout-to-walk ratio that we haven't seen consistently in several years.

The offense had a good night as well, but couldn't quite turn a good inning into a big inning. Jhonny Peralta had three hits, including a triple, Trevor Crowe contributed two hits, and Travis Hafner got on base three times. But once starter Jeff Niemann left the game, the Indians couldn't touch the Rays bullpen.

But even with the offense shut down after the sixth inning, the Indians still should have won the game. There were three key defensive miscues, not all of them scored errors, that kept the Rays in the game. In the first inning Trevor Crowe misjudged a Carl Crawford fly ball, let it drop towards the front of the warning track, and by the time he retrieved it, Crawford was standing on third base. Crowe got a bad jump on a liner in the eighth and couldn't make a diving catch on it, letting the tying run score. And Cabrera's replacement at shortstop, Luis Valbuena, couldn't get a ball out his glove in time to make a routine play in the eleventh. The Rays subsequently  executed a hit-and-run to perfection, and then Jason Bartlett laid down a well-placed squeeze bunt to allow the winning run to score. The Indians pitched a very good game, did some nice things on offense despite playing without Grady Sizemore and Asdrubal Cabrera in the lineup, but thanks to those three defensive lapses, lost the game. 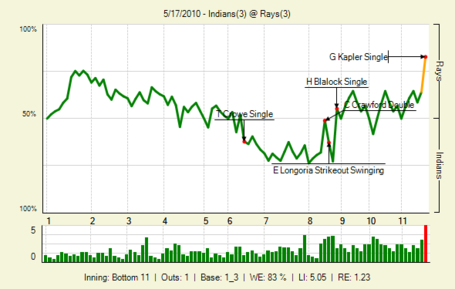