Earlier in the week, Jake Westbrook finally got his first victory since returning from Tommy John elbow surgery. Today he followed up that milestone with an even better performance. He went the distance, and almost threw a shutout; Luke Scott homered with two outs in the bottom of the ninth. 23 of the 27 outs recorded were either his specialty groundouts or strikeouts. His pitches, especially his slider, had excellent movement, and he was missing bats often during his outing. He allowed nine hits, which is pretty normal for Westbrook outing, but most of those hits were just singles, and he was able to pitch around tham. He also got help from his defense. The two outfielders who made errors in the first game of the series both made outstanding plays in the concluding game of the weekend. In the first, Grady Sizemore took away probably two runs by making a diving catch on a Ty Wigginton line drive. Wigginton was the victim of the second defensive gem as well; in the the fourth, he hit a line drive to the right of Shin-Soo Choo. Choo stopped the ball from getting to the wall, then popped up and threw a seed to second to nail Wigginton.

There were promising developments on offense as well. Grady Sizemore singled in the first run of the game, though unfortunately he had to eventually leave the game after injuring his knee running the bases. Matt LaPorta hit his first home run of the season to extend the lead to 3-0 in the fifth. Russ Branyan hit his fourth home run on the road trip in the top of the ninth to push the lead to 5. Jake was probably going to go out for the ninth regardless of the score, but that home run made his margin for error much more comfortable.

The Indians have a tough conclusion to this three city road trip in Tampa, but they've guaranteed themselves at least a .500 trip, and more importantly, seem to be getting some of their offensive laggards on track. 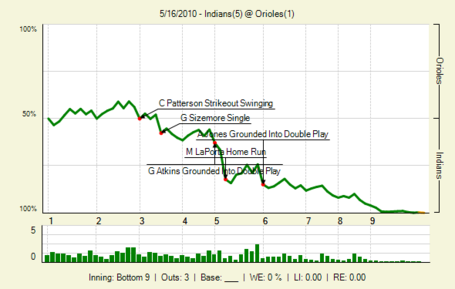