The Indians had many opportunities against both Orioles starter Brian Matusz and against a handful of Baltimore relievers in the eighth. In the seventh, the first two Indians reached, and after Manny Acta did the Orioles a favor by having Asdrubal Cabrera drop a sacrifice bunt down, Mark Grudzielanek couldn't hit a fly ball deep enough to score Lou Marson from third, and Shin-Soo Choo couldn't get a two-out hit.

In the eighth, Dave Trembley was Hargrovian in his pitching strategy, using three relievers to pitch to the first three batters of the inning. Frankly, Travis Hafner is no longer someone you need to bring out a specialist to pitch to, but Matt Albers was removed from the game in favor of LOOGY Will Ohman. Ohman walked Hafner, thus making the move seem even worse, and now Trembley had to bring on another right-hander to pitch to Jhonny Peralta. Uehara got Peralta, but now Manny Acta was free to pinch-hit left-handers for the next two right-handers in the lineup, since Ohman was out of the game and no left-hander was warming in the bullpen. Russ Branyan walked to bring the go-ahead run to the plate in the form of pinch-hitter Grady Sizemore, but Grady struck out on a high fastball to end the threat.

Mitch Talbot went eight innings, allowed five hits and two walks, but unfortunately for him two of those hits were solo home runs off the bat of Ty Wigginton. Ty, who first vaulted into our baseball consciences eight years as a cult hero  in New York, had spent most of the remaining years of the decade as a non-Met, and therefore, not a player worth paying attention to. He's a perfect player for the era of 12-pitcher rosters, thanks to his ability to fake it at second base and also hit for power. He actually wasn't supposed to play much second base with Brian Roberts pretty much a lock to start 150 games at the position. But Roberts got hurt, and he's been playing everyday and hitting like he's never done before. Talbot hung a changeup to him in the second, and he didn't miss it. He also didn't miss a Talbot fastball on the inner half of the plate in the seventh. Beyond the two solo shots, Talbot didn't have many problems, finishing the eighth with just over 100 pitches.

Although I rarely write recaps before the game is over, I always think up the main framework to hang the game details on while watching the contest. One game it might be a poor pitching performance, or another game it might be no hitting. Tonight it was going to be a very good Mitch Talbot outing marred by an inept offense that had opportunities but couldn't cash in on them. And a bit on Ty (Freaking) Wigginton. The above three paragraphs were essentially what I had planned to write, though probably with a more morose tone.

But thankfully the ninth inning happened, so there's more.

The Orioles brought in Alfredo Simon to close things out in the ninth. Simon had bounced around considerably in his career, but thanks to general bullpen problems, his perfect ERA was more than good enough to make him Baltimore's closer. He has a high-90s fastball, and it's tough to hit, assuming he has one of his other pitches working. Tonight he couldn't throw his splitter (or any of his off-speed pitches) for strikes. The problems started after he got Trevor Crowe to pop out to start the inning. Asdrubal Cabrera singled through the hole between first and second, and then he walked Mark Grudzielanek. Shin-Soo Choo, who's been one of few Indians to live up to even last season's offensive standards, drove home Cabrera with a sharp single to right. But thanks to all those missed opportunities, the Orioles still had the lead, and the Indians still need at least a single to tie the game. Simon got ahead of Austin Kearns 0-2 with his fastball. But instead of trying to put Kearns, who has recently been swinging and missing a lot, away with a regular fastball, Simon tried to throw his splitter. He hung it, and Kearns crushed the pitch deep into the first deck beyond left field to give the Indians a 4-2 lead. What happened after that still seems hard to believe. A Mike Redmond double. A Trevor Crowe home run (!). A final score of 8-2 after coming into the ninth three outs from being shut out a day after scoring just one run. 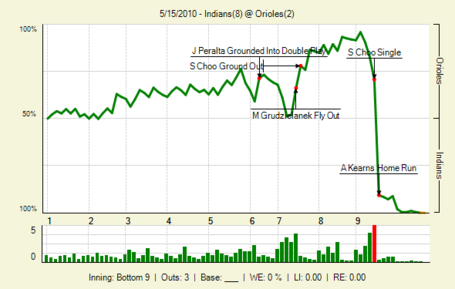