In a contest of two bad teams trying to lose this game, the Indians emerged with a hard-fought victory.

Against a lot of other teams, Justin Masterson would have been knocked out of the game in two or three innings. Thank goodness for the Orioles; they let him stick around until the sixth. Justin was in and out of the strike zone all night, walking 5 and hitting two batters. To open the sixth, Masterson walked Cesar Izturis, who was in the middle of a brutal slump, on four pitches, and followed that up by walking Corey (lifetime .290 OBP) Patterson. Things unraveled appropriately from there. Miguel Tejada drove in the two walks two batters later, turning a 2-1 deficit into a 4-1 deficit. Aaron Laffey had been warming in the hopes of containing the damage, but when he entered he couldn't keep his two inherited runners from scoring. After the Orioles went ahead 6-1, Laffey was taken out so that he could be used again this series, and the lost cause crew (Rafael Perez, Hector Ambriz) finished things up.

The defense was equally dreadful. Shin-Soo Choo played an Adam Jones liner into a triple in the third, allowing a run to score. The Indians then played the infield back, trying to limit the damage, but when Nick Markakis hit a grounder to the right side, for some reason Jones stayed at third. But no matter; LGFT Luke Scott singled Jones in later in the inning. Grady Sizemore made an error on another Scott single later in the game, allowing another run to score.

After the first inning, LGFT Jeremy Guthrie was perfect. Literally. He allowed his walk and hit in that first inning, and retired the Indians in order the next seven innings. It was his best start of the season by far, a common achievement for opposing pitchers. 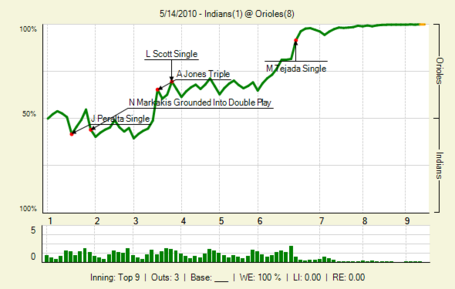