On MLBN and ESPN tonight, the big story from today's game will be: Zack Greinke got his first "win" today, and manager Trey Hillman got fired anyway.

The story for the Tribe, however, is more like this: Improbably, the Indians lineup got to Greinke, and somewhat less improbably, David Huff managed to cough up the game anyway. Huff looked more or less terrific for the first three innings, at the end of which he had induced seven groundballs out of the last eight batters. It quickly unraveled from there, however, as he coughed up three, two and one runs in the 4th, 5th and 6th innings, with nearly every hit and out the result of a fairly hard-hit ball.

Indians hitters started off the first inning with a sort of batting log haiku, embodying the type of season we're having:

Despite this prototypically frustrating beginning, the Indians did break through a few innings later on base knocks from Cabrera, Hafner, Kearns and Peralta, capped off by a two-run double from Matt LaPorta.

Capped off by a two-run double from Matt LaPorta!

Sorry, I just thought the good stuff deserved equal emphasis. Also of note: Grady went 0-for-5, including a miserable bunt-single attempt and several high-leverage outs — and he also blew a key diving catch in in 5th (note the WE% spike on the graph below, marked "B Butler Double"). It may not be entirely fair to dump on a guy having a bad day against the incumbent Cy Young winner, but it was lefty-vs.-righty, and the other guys were getting their hits okay. Rafael Perez and Kerry Wood notched decent innings, the latter garnering his first coveted "Game Finished" of the season. 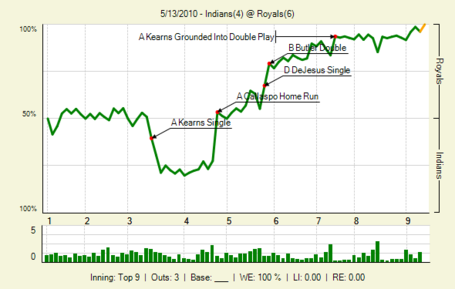